Violet Jessop said that it was her habit to breathe in the fresh air on deck before retiring for the night. Regarding the fourth day of sailing on Titanic she wrote:

“If the sun did fail to shine so brightly on the fourth day out, and if the little cold nip crept into the air as evening set in, it only served to emphasize the warmth and luxuriousness within.”
.

.
From the second day on, after leaving Southampton on its maiden voyage, RMS Titanic received reports of ice from ships passing through, or stopped due to heavy ice in the region she would be sailing to New York. On the 11th she received six warnings, on 12th five, on 13th three, and on 14th six. As a matter of fact, the Marconi room of RMS Titanic relayed some of the warnings to the shore.

As a routine, all these messages would have been logged in the radio book as they were received or intercepted and passed on to the officers on the bridge. So, it is unlikely that Captain Edward Smith and his officers would have been unaware of the dangerous ice that was lying directly in the path of the ship.

Here are the messages received or intercepted on Sunday, April 14, 1912 – four days into the crossing:

Action taken: This message referred to bergs, growlers and field ice sighted on April 12, 1912 – at least 48 hours before the time of transmitting the message. At the time this message was received RMS Titanic was at 43°35’N, 43°50’W. Captain Smith acknowledged the receipt of this message and posted it for his officers to read.

At about 8 am on April 14, 1912, Greek steamer Athinai (call sign MTI) belonging to the Hellenic Transatlantic Steam Navigation Company, Westbound from Piraeus and Mediterranean ports to New York, encountered a large ice field containing several large bergs. During the morning she sent an ice advisory to RMS Baltic, an ocean liner of the White Star Line, Eastbound New York to Liverpool.

Action taken: At the time this message was received the RMS Titanic was at about 42°35’N, 45°50W. Captain Edward Smith acknowledged the receipt of this message.

.
Captain Smith showed the message to J. Bruce Ismay, the Managing Director of the White Star Line, onboard the RMS Titanic on her maiden voyage to let him know that ice was to be expected that night. The latter pocketed the message and showed it later to two ladies, and of course, many people on board became aware of its contents. At 7:15 pm, Captain Smith asked for its return, when it was finally posted in the chart room.

At 11:20 am, the German steamer SS Amerika, belonging to the Hamburg America Line of Germany, Eastbound, New York to Hamburg sent an ice advisory telegram message to the Hydrographic Office in Washington, DC via RMS Titanic because Titanic was nearer to Cape Race, to which station it had to be relayed to reach Washington. Here is a facsimile of the message:

.
.Action taken: The location of the bergs 41°27’N, 50°08’W was 12.5 miles from where the RMS Titanic later sank. The message does not mention at what hour the bergs had been observed. However, as a message affecting navigation, it should have been taken to the bridge. The two Marconi operators on board Titanic were 25-year-old John George Phillips, better known as “Jack Phillips”, and his Deputy, 22-year-old Harold Sydney Bride. Maybe Phillips waited until the ship would be within call of Cape Race (at about 8:00 or 8:30 pm). No one onboard the RMS Titanic knew about this message outside the Marconi room.

The SS Californian, a tramp steamer of The Leyland Line, transporting cargo to whichever port wanted it, commanded by Captain Stanley Lord, left London on April 5, 1912, and was on her way to Boston, Massachusetts. Although she was certified to carry up to 47 passengers, she carried none during this trip. She had a crew of 55 men. At 6:30 pm she sighted three bergs to her southward, 15 miles (24 km) north of the course the RMS Titanic was heading.

At 7:30 pm, Cyril Evans, the only wireless operator of the SS Californian (call sign MWL), sent a wireless message of the ship’s position to their sister ship SS Antillian:

Action taken: Harold Bride, the other wireless operator on RMS Titanic intercepted the message but delivered it to the ship’s bridge only at 10:20 pm. Later, Bride said that he could not remember to whom he delivered this message.

.At 9:40 pm, the Marconi station of the MV Mesaba (call sign MMU) belonging to the Atlantic Transport Line sent the following message:

Action taken: This message clearly indicated the presence of ice in the immediate vicinity of the RMS Titanic and was not delivered to the deck or to any of the officers.

.
This message never left the Titanic’s radio room because the wireless set had broken down the day before, resulting in a backlog of messages that the two radio operators Jack Phillips and Harold Bride were trying to clear. At the time this message reached Titanic’s radio room an exhausted radio operator Harold Bride was getting some much-needed sleep. Phillips may have failed to grasp the significance of the message as he was preoccupied with transmitting and receiving messages for passengers via the relay station at Cape Race, Newfoundland.

At Longitude 42°05’N, 50°07’W, a position to the south of the Grand Banks of Newfoundland, SS Californian was confronted by a large ice field. Captain Stanley Lord decided to halt the ship at 10:21 pm and wait until morning to proceed further.

Around 11 pm, Lord saw a light in the east but thought it could be a rising star.

At 11:10 pm Third Officer C.V. Groves on deck also saw the lights of a ship 10 or 12 miles away. To him, it was clearly a large liner as he saw brightly lit multiple decks. Fifteen minutes later Groves informed Captain Lord of what he saw.

They tried to contact the other ship using a Morse lamp but did not see any reciprocal reply. The Captain then asked his wireless operator Evans if he knew of any ships in the area. Evans said: “only the Titanic.” Captain Lord instructed Evans to call RMS Titanic and inform her that the Californian was stopped, surrounded by ice.

When Evans tried to convey the message the RMS Titanic‘s on-duty wireless operator, Jack Phillips, was busy working on a large backlog of personal messages sent and received from the wireless station at Cape Race, Newfoundland. The relative proximity of SS Californian made signals sent from it loud in Phillips’ headphones. So, Phillips rebuked Evans with: “Shut up, shut up! I am busy; I am working Cape Race!“

Evans waited and at 11:30 pm when he did not receive any reply from Phillips he switched off the wireless and went to bed. 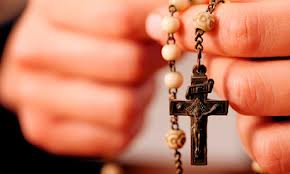 .
Violet Jessop was a firm believer in the power of prayer. As a devout Catholic, she always had a rosary in her apron. In her memoirs, Violet says she had taken along with her belongings a copy of a translated Hebrew prayer that an old Irish woman had given her. On that fateful day, after settling down in her bunk she read the strangely worded prayer supposed to protect one who read it against fire and water. Then, she persuaded her roommate, a stewardess (according to editor John Maxtone- Graham, possibly Elizabeth Leather) to read it.

← Previous: Part 2 – Aboard the RMS Titanic

Next → Part 4 – Sinking of the RMS Titanic