At full speed it took four hours for the RMS Carpathia, working her way through dangerous ice fields in the dark, to reach the RMS Titanic. When Carpathia arrived at the scene at 4 am on the morning of April 15, 1912, Titanic had already sunk. Carpathia took on around 700 survivors of the disaster from Titanic‘s lifeboats. It rescued the last of the survivors in the lifeboats by 9:15 am.

The figures below are from the British Board of Trade report on the disaster.

Harold Bride after being picked up by the RMS Carpathia assisted Harold Cottam in dealing with a constant exchange of messages in the following hours.

Lifeboat 12 reached the RMS Carpathia at 8:30 am where Jack was reunited with his mother. A kind passenger on the Carpathia gave Jack his pajamas and a bunk to sleep. Later, Jack Thayer reflected that the brandy he had drunk on that day was his first shot of hard liquor.

After being picked up by the RMS Carpathia, Bruce Ismay was taken to the ship’s doctor, Frank Mcgee’s cabin. Ismay gave Captain Rostron a message to send to White Star Line’s New York office:

During the entire journey to New York on board RMS Carpathia, Ismay never left Dr. Mcgee’s cabin. He did not eat any solid food and had to be kept under the influence of opiates.

“[Ismay] was staring straight ahead, shaking like a leaf. Even when I spoke to him, he paid absolutely no attention. I have never seen a man so completely wrecked.”

The RMS Carpathia finally reached New York on April 18, 1912. Guglielmo Marconi, visited his exhausted radio operators on board. He himself had plans to  to cross the Atlantic on the ill-fated RMS Titanic, but had changed his plans. He arrived In New York on the RMS Lusitania.

After their arrival in New York, Jack Thayer, his mother and Miss Fleming took the Thayer’s private train carriage from Jersey City, NJ, back home to Haverford.

After graduating from the University of Pennsylvania, Jack Thayer took on banking. A few years later he was appointed Financial Vice-President and Treasurer of the University. He served as an artillery officer in the US Army during World War I. He married Lois Cassatt and they had two sons. Edward C. Thayer and John B. Thayer IV.

In 1940, conceivably, as an attempt to purge some of the memories that still haunted him, Jack Thayer produced a pamphlet relating his experiences with the Titanic’s sinking in vivid detail in a self-published pamphlet. Just 500 copies were printed exclusively for family and friends. Oceanographer Robert Ballard used the details of Jack Thayer to determine the location of the Titanic and proved that the ship had split in half as it sank, contrary to popular belief, as was finally confirmed when the wreck of the Titanic was discovered.

During World War II, both his sons enlisted in the armed services. In 1943, Edward Thayer was a bomber pilot in the Pacific theatre. After his plane was shot down, he was listed as missing and presumed dead. His body was never recovered.  When the news of Edward’s death reached him, Jack Thayer, became extremely depressed.

On the 32nd remembrance day of the RMS Titanic‘s collision with the iceberg, Jack Thayer’s mother Marian died. The loss of his mother depressed him further.

On September 20, 1945, Jack Thayer committed suicide by cutting his throat and wrists in an automobile at 48th Street and Parkside Avenue in West Philadelphia.

He is buried at the Church of the Redeemer Cemetery, Bryn Mawr, Pennsylvania.

In New York, Bruce Ismay was hosted by Philip Franklin, vice-president of the company. Ismay also received a summons to appear before a Senate committee headed by Republican Senator William Alden Smith the following day and a few weeks later he appeared before the British Board of Trade chaired by Lord Mersey.

Bruce Ismay testified that as the ship was in her final moments, he was working at an oar, his back to the ship so as to avoid watching his creation sink beneath the waters of the North Atlantic. During the United States Inquiry he assured that all the vessels of the International Mercantile Marine Company would be equipped with lifeboats in sufficient numbers for all passengers.

After the inquiry, Ismay and the surviving officers of the RMS Titanic returned to England aboard RMS Adriatic. Ismay’s reputation was irreparably damaged and he maintained a low public profile after the disaster. London society ostracized Ismay for life and labelled him one of the biggest cowards in history.

The American and the British press the American and the British press Bruce Ismay for deserting the ship while women and children were still on board. Some newspapers, even conjectured that Ismay jumped into the boat, despite there being women still near the lifeboat. Some papers called him the “Coward of the Titanic” and others named him as “J. Brute Ismay” and suggested that the White Star flag be changed to a yellow liver.

Ben Hecht, then a young journalist in Chicago, wrote a scathing poem titled “Master and Man” for the Chicago Journal contrasting the actions of Captain Edward Smith, the master of RMS Titanic who had just gone to an icy grave with his ship along with a majority of its passengers, and J. Bruce Ismay, chairman and managing director of the White Star Line of steamship safe on the rescue ship RMS Carpathia.

Master and Man
by Ben Hecht

The Captain stood where a
Captain should
For the Law of the Sea is grim;
The Owner romped while the ship was swamped
And no law bothered him.
The Captain stood where the Captain should
When a Captain’s ship goes down
But the Owner led when the women fled,
For an Owner must not drown.
The Captain sank as a man of Rank,
While his Owner turned away;
The Captain’s grave was his bridge and brave,
He earned his seaman’s pay.
To hold your place in the ghastly face of Death on the Sea at Night
Is a Seaman’s job, but to flee with the mob
Is an Owner’s Noble Right.

However, some newspapers claimed Ismay’s escape was justified since he was a passenger just like any other passenger on board the RMS Titanic. Some journalists maintained that Ismay bound by the dictum, “Women and children first” assisted many women and children himself. At the inquiry Bruce Ismay and first-class passenger William Carter said they boarded Collapsible C lifeboat only after there were no more women and children near that lifeboat.

On June 30, 1913, Ismay resigned as president of International Mercantile Marine and chairman of the White Star Line, to be succeeded by Harold Sanderson. 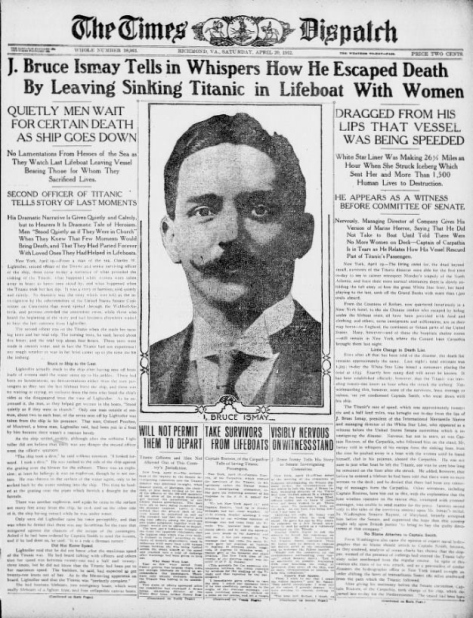 The above news “J. Bruce Ismay Tells in Whispers How He Escaped Death By Leaving Sinking Titanic in Lifeboat With Women” in The Times Dispatch reminds me of an apocryphal account of how Violet Jessop got into the lifeboat:

Violet watched patiently as the crew members loaded the passengers on to lifeboat Later, they called out “Are there any more women before this boat goes out?”

Bruce Ismay, who had already got into the boat loaded with women saw Violet and said: “Come along; jump in.“

Violet replied: “I am only a stewardess.“

Ismay said: “Never mind – you are a woman; take your place.“

Just as the boat was being lowered, an officer of the Titanic gave her a baby to look after.

According to this unsubstantiated account Violet Jessop would have got into lifeboat C along with Bruce Ismay.

Violet Jessop, said later that while on board the RMS Carpathia, a woman without saying a word grabbed the baby Violet was holding and ran off with it; and many years after her retirement on a stormy night Violet received a telephone call from a woman who asked her if she saved a baby on the night the Titanic sank. When Violet replied “Yes,” the caller said, “I was that baby.”

When she told this to John Maxtone-Graham, her friend, and biographer, the latter said it would have been most likely some prankster. Violet replied, “No, John, I had never told that story to anyone before I told you now.”

The above account is a bit enigmatic. Some sources say that Violet Jessop escaped from the sinking Titanic on lifeboat 16. According to available records, the only baby in lifeboat 16 was 5-month-old Master Assad Alexander Thomas/Tannous who was handed over to 27-year-old Miss Edwina Celia Troutt. The infant was later reunited with his mother on the RMS Carpathia. Also, according to available records there were only two stewardesses on that lifeboat: 28-year-old Miss Evelyn Marsden and 41-year-old Mrs. Mary Kezia Roberts.

Many survivors lost all their possessions and became destitute. Many families, those of crew members from Southampton in particular, lost their principal breadwinners and were helped by charitable donations.

Videos taken at the wreck site of the Titanic by recent expeditions, show empty holes where the rivets gave way. Recent investigations by forensic experts reveal the rivets holding the steel plates are the real culprits leading to the Titanic catastrophe. Tests show flaws in the rivets used in the construction of Titanic. Inferior grade iron was used to manufacture the three million odd rivets that were used to hold the steel plates together.

After the demise of RMS Titanic, the SS Majestic was pressed back into service once again, filling the hole in the transatlantic schedule of White Star Line.

Even after the horrendous experience on RMS Titanic Violet Jessop continued to work as a stewardess on ocean-liners. Her next posting as a stewardess was on HMHS Britannica.

Next → Part 6 – Aboard the HMHS Britannic