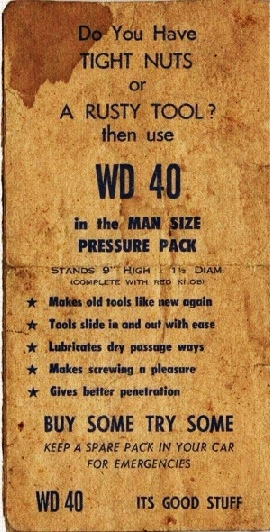 The above leaflet from the 1960’s  created by a master craftsman is a gross and most brazen advertisement loaded with double entendre for WD-40. It is an innuendo that seems to work with the true facts of what WD-40 can do. Even though the ad is a fake, it gives the impression of a real advert from the 1960’s with the stains and frayed edges.

On November 4, 2014,  a user posted this image showing a printed advertisement for the WD-40 spray lubricant  in a “funny photos” thread on the US Message Board, asserting it was an ad from 1960. As the image got shared on sites such as  Facebook, Imgur, and Reddit, the date changed,  with the most common claim being 1964.

Several attributes of the advertisement give it away as a fake:

1. If this was a genuine, high-profile ad for WD-40 why is it the only photograph available on the Internet documenting its existence?

2. If you look at this image critically you will note that it is not a photograph at all. The  paper on which the advertisement appears looks old and crinkled, but the letters are straight. This implies that the text is  a digital overlay on a background image of a crinkled page.

4. The image refers to a ‘red knob‘ whereas the distinctive red cap that now tops the WD-40 cans was originally black!

By the way, those of you not familiar with WD-40 must be wondering what the hell it is.

Back in 1953, Norm Larsen founded the Rocket Chemical Company. The fledgling company and its staff of three set out to create a line of rust-prevention solvents and degreasers for use in the aerospace industry.

Working in a small lab in San Diego, California, Norm Larsen, a persistent chemist, perfected his water displacing formula on his 40th try. So, WD-40 stands for “Water Displacement, the 40th formula“, a name that came straight out of the lab book used by Norm Larsen.

The formula of WD-40 is a trade secret. Out of fear of disclosing its composition Norm Larsen did not apply for a patent for WD-40 in 1953. The opportunity for patenting the product has long since elapsed since the application for a patent should have been filed prior to any public use or public disclosure of the invention anywhere in the world. Even today, the original secret formula for WD-40 is still in use.

The Convair Division of General Dynamics at the Kearny Mesa assembly plant north of San Diego, California, built the SM-65 Atlas, for U.S. Air Force. It was the first intercontinental ballistic missile (ICBM) developed and deployed by the United States that became operational in October 1959. The Atlas missile’s warhead was over 100 times more powerful than the bomb dropped over Nagasaki in 1945.

Later on, for almost half a century, the Atlas missile served as a first stage satellite launch vehicle.

The balloon-like paper-thin stainless steel fuel tanks of the Atlas missile were and fragile, and when empty, to prevent them from collapsing, they had to be kept inflated with nitrogen.

Convair used WD-40 as a corrosion-inhibiting coating to protect the paper-thin stainless steel outer skin of the fuel tanks of the Atlas missile from rust and corrosion.

WD-40 worked well to inhibit rust and corrosion. This prompted several employees to sneak out some WD-40 cans out of the plant to use in their homes.

A few years following WD-40’s first industrial use, Norm Larsen reasoned that consumers might find a use for the product in their homes as some of the employees had. So, in 1958, he put the product into aerosol cans and made it available in stores in San Diego.

In 1960, Norm Larsen’s Rocket Chemical Company doubled in size, growing to seven people and sold an average of 45 cases per day to hardware and sporting goods stores in the San Diego area.

On Monday, September 11, 1961, Hurricane Carla, ranked as the most intense US tropical cyclone with a highest wind speed of 280 km/h made landfall near Port O’Connor, Texas. To meet the disaster needs of the victims of Hurricane Carla along the US Gulf coast, the Rocket Chemical Company filled its first full truckload order for WD-40 to use in reconditioning flood and rain damaged vehicles and equipment.

In 1968, soldiers in Vietnam received goodwill kits containing WD-40 to help keep their firearms in superb working condition by preventing damage from moisture.

WD-40 is now virtually a household name in America with 80% American households using it. About 81 percent of professionals in many consumer and industrial markets such as aviation, automotive, manufacturing, construction, hardware, home improvement, farming, and sporting goods, use it regularly.

(1) Aliphatic hydrocarbons – 50%: According to the manufacturer’s website this ratio in the current formulation per se is not Stoddard solvent which is a similar mixture of hydrocarbons.

(3) Low vapor pressure aliphatic hydrocarbon – 12 to 18%: To reduce the liquid’s viscosity for use in aerosols. The hydrocarbon evaporates during application.

(4) Carbon dioxide – 2 to 3%: A propellant used instead of the original liquefied petroleum gas to reduce WD-40’s flammability.