Now that we have entered the 21st century, please allow me to  reminisce on a device that helped our grandparents and parents to usher in the previous century – The Kodak “Brownie” Camera.

George Eastman (July 12, 1854 – March 14, 1932) was born in Waterville, New York. His father, George W. Eastman, ran a business college in Rochester, New York. His mother, Maria Kilbourn, took care of young George and his two older sisters. Two years after the family moved to Rochester, when he was seven, his father died. To add to the family’s small income, his mother had to take in boarders.

George educated in Rochester public schools dropped out at age thirteen to work and help his mother. By 1877, he advanced from messenger to bookkeeper in the Rochester Savings Bank.

On a trip to Mackinac Island, photographic chemicals among his cameras and supplies ruined his packed clothes. He became disgusted with the wet-plate process of producing photographs.

Eastman experimented using dry plates. He was the first American who contributed to the improvement of photographic methods. He coated glass plates with gelatin, and silver bromide. In 1879, he patented his coating machine in England, and in 1880 he received an American patent for it. He sold his English patent and opened a shop in Rochester to manufacture photographic plates.

Next, Eastman did away with glass plates. He coated paper with gelatin and photographic chemicals. The developed film was stripped from the paper to make a negative. This film was rolled on spools. Eastman and William Walker created a lightweight roll holder that would fit any camera.lightweight roll holder that would fit any camera.

In1884, Eastman substituted transparent film for the paper. Flexible film was created by Hannibal Goodwin of New York and a young Eastman chemist, Henry Reichenback. There was a long patent battle between Goodwin and Eastman. It was the most important legal dispute in photographic history. In August 1913, a federal court decision favored Goodwin and in 1914 Eastman paid five million dollars to Goodwin’s family and Ansco Company, owners of his patent.

Eastman’s next move was to create a trademark to dramatize his innovative camera.

There is a misconception that the name KODAK was chosen as a trademark because of it resembles the sound produced by the shutter of the camera.

It has also been told by some historians that the name KODAK was originally suggested by David Houston, a fellow photographic inventor who held the patents to several roll film camera concepts that he later sold to Eastman. Houston, who started receiving patents from 1881, was said to have chosen “Nodak” as a nickname for his home state, North Dakota.  However, this is contested by other historians, who cite that KODAK was registered as a trademark even before Eastman bought Houston’s patents.

“A trademark should be short,” said George Eastman. “It should be ‘vigorous.’ It should be incapable of being misspelled to an extent that will destroy its identity”; and “it must mean nothing.”

Eastman had an affinity towards the letter “K”. It might have been due to his mother’s maiden name being Kilbourn.

In the same year, Eastman designed a simple camera, the Kodak which he patented on September 4, 1888.  It was easy to carry and handheld during its operation. There was no need to focus the lens, and there was no need to adjust the aperture for the available light. 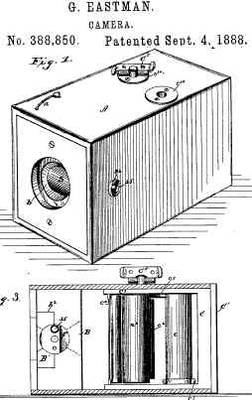 Pre-loaded with enough film for 100 exposures, it sold for twenty-five dollars. After taking the pictures the whole camera was returned along with ten dollars to the Kodak, Rochester factory in New York, where the film was developed, prints were made, new the new photographic film was reloaded, and then the camera and prints were returned to the customer.

Eastman’s advertising slogan “You press the button, we do the rest,” for his Kodak camera became very popular.

Daylight-loading film and cameras soon made it unnecessary to return the cameras to the factory. Eastman’s old slogan changed to “You press the button, we do the rest, or you can do it yourself.“

The KODAK “Brownie” camera made its debut at the turn of the twentieth century. The company, Eastman Kodak, introduced the Brownie box camera in 1900 and priced it at one dollar. The camera was launched with a major advertising campaign. During the first year alone, one hundred thousand Kodak “Brownie” cameras were sold. There were two reasons behind the choice of the name “Brownie” for the camera. At the time of the launch, a children’s book of cartoons by the name “Brownie” was very popular. Secondly, the camera was initially manufactured for Eastman by Frank Brownell of Rochester, New York.

The KODAK “Brownie” camera brought photography into the hands of amateurs and it made it possible for the middle class to take their own “snaps” as well.

In 1952, my father gave me a Kodak Brownie 620 Box Camera. I was able to take eight black and white photos with one loading.

Here are some photographs I took during that period in India with my good old Brownie.

5 thoughts on “The Kodak “Brownie” Camera”