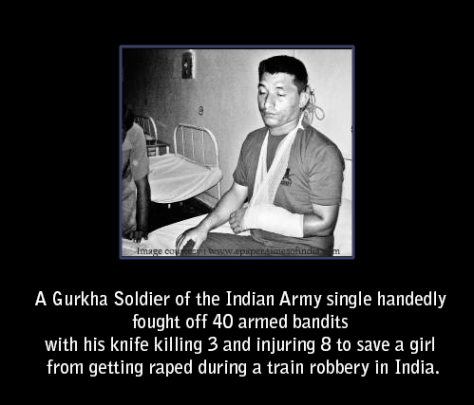 Today I saw this image with the caption on Facebook. The person in the image is Vishnu Shresta, a Gorkha Rifles Jawan. I salute him for his brave act fighting dacoits on September 2, 2012 while traveling on Maurya Express between Kulti and Chittaranjan stations in India.

However, as the days passed by the media distorted the facts. This is one case to show why one should not believe whatever that come across their way in print, absolutely. I do not understand why people try to distort facts to gain readership.

1. How many dacoits were involved?

The Indian Express of September 3, 2010, reported the involvement of 11 dacoits.

According to the eastern railway officials: “A gang of 11 armed dacoits yesterday barged into a compartment of the train at around 11 pm and assaulted the passengers before decamping with cash, a laptop, 33 mobile phones and other valuables.”

However, the following day The Times of India, Calcutta Edition increased the number of dacoits to 30:

Nearly 30 armed dacoits looted cash and valuables worth 10 lakh from passengers of Maurya Express between Kulti and Chittaranjan stations along the West Bengal-Jharkhand border on Thursday night.

A retired Indian Gorkha soldier recently revisited those glory days when he thwarted 40 robbers, killing three of them and injuring eight others, with his khukuri during a train journey

“After looting the train, when the robbers started to strip a 18-year-old girl in front of him, he couldn’t contain his calmness. He took out his khukari and took on the a group of 30 robbers, alone. In the fight, he killed three of dacoits and injured eight others. Remaining dacoits fled the scene to save their lives.”

“Suddenly, there were shouts and the sound of running feet,” Shresta recounted from his bed at Kasturba Gandhi Hospital in Chittaranjan. “Somebody pulled at my bedclothes. I sat up and found a number of people standing near my feet. They demanded that I hand over all my cash and valuables. There was confusion all around and I shouted that I am an Indian Army jawan. The criminals backed off and turned their attention to a woman and her child, who were on a berth close by,” Shresta added.

He lost his cool when he saw a miscreant trying to pull out the girl, about 8 years old, from the berth and snatch a necklace from her mother.

The above earliest news reports do not indicate any rape perpetrated on a 18-year-old girl.

3. Were any dacoits killed?

The early news reports in The Indian Express of September 3, 2010 and The Times of India, Calcutta Edition of September 4, 2010 do not mention any dacoits killed. However, the reports that I read on two separate websites xnepali.com on January 16, 2011 and again in OFFICER.com on February 11, 2012, say:

“After looting the train, when the robbers started to strip a 18 year old girl in front of him, he couldn’t contain his calmness. He took out his khukari and took on the a group of 30 robbers, alone. In the fight, he killed three of dacoits and injured eight others. Remaining dacoits fled the scene to save their lives.” (sic)

In fact, the second website OFFICER.com just copied the news from xnepali.com and published the news without even changing a punctuation mark.