Hurricane Sandy, a.k.a., The Perfect Storm, The Super Storm, The Monster Storm, Frankenstorm and by various other names bore down on the U.S. East
Coast, on Monday, October 29, 2012.

As hurricane Sandy loomed in on the U.S. East Coast’s largest cities, forecasters warned that 60 million people in those regions could face threatening high winds, huge rainfall and sea water surging up to a height of 11 feet. This forced the government to impose mandatory evacuation from some coastal zones. Hundreds of thousands moved to higher ground leaving their homes.

The public transport system shut down, and a number of bridges closed. Many financial and business establishments put down their shutters. The U.S. stock market suffered its first weather-related closure in 27 years.

The monster storm caused more than two-thirds of the East Coast’s refining capacity to shut down and fuel pipelines to idle. Early assessments show the region’s biggest plants may have escaped damage.

Bracing for high winds: The winds of Hurricane Sandy pound waves onto the east side of Ocean Isle Beach, North Carolina, October 27, 2012.

Shopping for the storm: Customers stock up on bread at a Manhattan grocery store, Sunday, Oct. 28, 2012, in New York.

NYSE shuts down: The floor of the New York Stock Exchange is empty of traders, Monday, Oct. 29, 2012, in New York. Trading has rarely stopped for weather since the Great Blizzard of 1888.  All major U.S. stock and options exchanges remained closed Monday and Tuesday, the first time that the weather caused a two-day market shuts down. A blizzard led to a late start and an early close on Jan. 8, 1996, according to the exchange’s parent company, NYSE Euronext. The NYSE shut down on Sept. 27, 1985 for Hurricane Gloria.

Morning commute in the rain: People walk on an empty street in New York as the massive storm Sandy, described by forecasters as one of the largest ever that hit the United States, makes its way towards the population-dense East Coast. Michael Bloomberg, mayor of New York, has asked the public to stay at home when Sandy slams the city. Nearly 10,000 flights have been canceled for Monday and Tuesday by airlines bracing for Hurricane Sandy.

Spooky gray NYC skyline: This view from Exchange Place shows the skyline of lower Manhattan in darkness after a preventive power outage caused by the giant storm Sandy in New York on October 29, 2012.

Shopping in the rain: Photo taken from the window of a grocery store of a woman shopper hurrying in the windblown rain of Hurricane Sandy on October 29, 2012.

Walking through flooded streets: A walk through the flood waters on Monday, Oct.ober 29, in Fenwick Island, Delaware,

The President in the rain: After canceling his appearance at a morning campaign rally in Orlando, Fla., President Barack Obama walks toward the White House in a driving rain after returning to Washington to monitor preparations for early response to Hurricane Sandy, Monday, Oct. 29, 2012.

A crane dangles: A crane dangles over the Manhattan skyline at 157 West 57th Street after the winds from Hurricane Sandy cause it to collapse.

High Water signs: A car goes through the high water as Hurricane Sandy bears down on the East Coast, Sunday, Oct. 28, 2012, in Ocean City, Md. 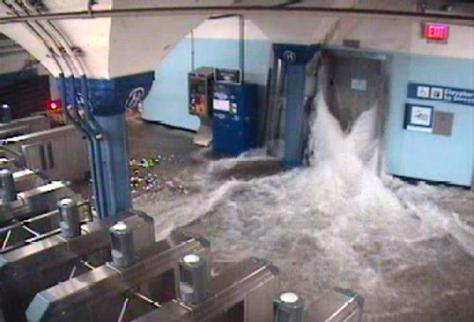 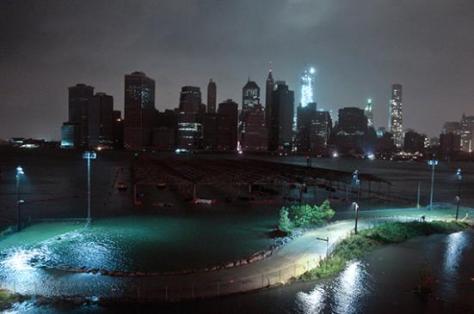 Building full with debris: The front of a building full of debris after the passing of giant storm Sandy at Exchange Place, New Jersey October 30, 2012.

Devastated homes after the storm: Homes that are devastated by fire and the effects of Hurricane Sandy are seen at the Breezy Point section of the Queens borough of New York October 30, 2012. Millions of people across the eastern United States awoke on Tuesday to scenes of destruction wrought by monster storm Sandy, which knocked out power to huge swathes of the nation’s most densely populated region, swamped New York’s subway system and submerged streets in Manhattan’s financial district.