Pakistan had slumped to 81-8 in the 26th over of the first session when, an hour-long rain interrupted the play. The umpires reduced the game to 48-overs-a-side after the rain stopped.

In the second session, Dilshan Tillakartane hit an unbeaten 50. Sri Lanka surpassed the Duckworth-Lewis target of 101 in the 19th over. It was apparently a one-sided game.

A video footage of the teams while they were leaving the field after Sri Lanka winning the series shows Pakistan’s Ahmed Shehzad allegedly delivering a religious comment to Dilshan Tillakartane. This has created an uproar in the cricketing circle.

The Associated Press report said that as the players headed back to the dressing room after Sri Lanka won the series, Ahmed Shehzad caught on camera told Dilshan “… if you are a non-Muslim and you turn Muslim, no matter whatever you do in your life, straight to heaven.“

Dilshan’s reply was not clearly audible.

Then Shehzad continued saying, “Then, be ready for the fire,” the report added.

Dilshan Tillakartane and the Sri Lanka Cricket Board are unconcerned about the religion-focused comments Shehzad had supposedly made. Dilshan said he thought little of the exchange, and will not consider lodging a complaint. He said he does not remember what he said to Shazad. He further said that he had no issues at all because he was happy with the win. Michael de Zoysa, manager of the Sri Lanka team said, the SLCB Board will consider the matter closed.

The Pakistan Cricket Board became aware of the exchange after a journalist brought it to their notice. The footage went viral in Pakistan and Sri Lanka.

The PCB set up an inquiry under director of international cricket Zakir Khan and on Wednesday, September 3, 2014, summoned Shehzad for an explanation. The player said he came to know of Dilshan’s religious background during the match, and simply sought a lighthearted discussion. Shehzad said the video only showed part of their exchange, and that he had not wished to offend Dilshan.

Though no complaints have been, the PCB did not find a contract or code of ethics breach in Shehzad’s behaviour, he was officially reprimanded and not to engage in religious exchanges in the future.

Ahmed Shehzad was born on November 23, 1991 in Lahore, Punjab, Pakistan. He is a right-handed opening batsman and a part-time leg-break bowler.  He played domestic cricket for Habib Bank Limited. He made his One-Day International and T20 debut for Pakistan against Australia on April 24, and May 7, 2009 respectively.

An incident happened at the end of the 19th over when Shehzad got involved in a debate with Dilshan, which ended with the former pushing Dilshan’s shoulder.

Shehzad has been fined 50 percent of his match fee for pushing Sri Lankan opener Dilshan Tillakaratne during the third one-day game, the sport’s governing body said on Monday.  The ICC statement said:

“The opener was found to have breached Article 2.2.4 of the ICC code of conduct for players and player support personnel, which relates to ‘inappropriate and deliberate physical contact between Players in the course of play during an international match’.“

Dilshan Tillakaratne was born on October 14, 1976 in Kalutara, Sri Lanka, to a Ja (Malay) Muslim father and a Buddhist mother and was earlier known as Tuwan Mohamed Dilshan. His younger brother formerly carried the name Tuwan Mohamed Nishan Sampath was born on June 23, 1982 in Jaffna, Sri Lanka and is a Sri Lankan first class cricketer.

Dilshan’s childhood coach Ranjan Paranavitana said that even though Dilshan carried a Muslim name, from their childhood, he and his brothers and sisters followed Buddhism, their mother’s religion.

Roshan Abeysinghe, the manager of both Dilshan Tillakaratne and Suraj Randiv said the players took up their mothers’ religion and identity for personal reasons. Abeysinghe also said that Dilshan wanted a Sinhala identity.

It is rumoured in certain quarters that both players changed their religion and names because being Sinhala-Buddhist enhanced their chances of selection to the highest levels in Sri Lankan cricket. But this rumour is just bull-shit, because Dilhara Fernando, Ajantha Mendis, Angelo Mathews, Dhammika Prasad and Chaminda Vaas are Catholics, and most of them make the sign of the cross before they start their bowling run. Russel Arnold is a Methodist Christian of Tamil descent, and Muthiah Muralidharan is a Tamil Hindu by birth.

The Board of Control for Cricket in India (BCCI) confirmed that the 39-year-old living Indian cricket legend Sachin Tendulkar has retired from one-day cricket (ODI). Last Sunday Sachin Tendulkar announced the end of his illustrious career in one-day-international cricket.

In a statement released on Sunday, he said: “I have decided to retire from the one-day format of the game; I feel blessed to have fulfilled the dream of being part of a World Cup winning Indian team (in 2011); I am eternally grateful to all my well-wishers for their unconditional support and love over the years.”

In March 2012, Tendulkar played his last one-day match against Pakistan, the team against which he made his début almost exactly 23 years ago.

Known as the “Little Master,” Tendulkar holds the record for scoring the highest number of runs in ODIs, and the first batsman in the history of the one-day cricket to score a double century.

All acknowledge Sachin Tendulkar as the greatest living batsman and second only to Don Bradman.

In June this year India glorified the living cricket legend by nominating him as a member of the Rajya Sabha (or Council of States or the upper house of the Parliament of India).

His ardent fans in India and abroad call him “The God of Cricket”, and the above figures justify that.

We have to thank Shri Raj Singh Dungarpur, former president of the Board of Control for Cricket in India for introducing Ramesh Tendulkar to the world of cricket. The BCCI selection committee under the chairmanship of Dungarpur chose Sachin Tendulkar for the 1989 Indian tour of Pakistan. On his international Test debut in November 1989, Sachin Tendulkar was 16 years 205 days of age, the third youngest cricketer to make his first appearance in international cricket.

Former Indian skippers Krishnamachari Srikkanth and Sourav Ganguly were full of praises for Sachin Tendulkar. Both declared that his records could never be matched.

Srikkanth said: “I am surprised by his move, but he is leaving ODI cricket on a high.”

Sourav Ganguly said: “I felt that he might have played on, but it is his decision.. There was a doubt on whether he would play ODI cricket or not. However, I am not surprised by his decision. He has done what he thought was right.”

“Actually I am surprised,” said Dilip Vengsarkar, the former India captain. “If he is continuing with international cricket [in Tests] then he should have continued with ODI also.”

The Indian spinner Harbhajan Singh tweeted: “Sachin tendulkar a great batsman. great human being. a great friend. great man to look up 2. proud indian. Real son of india. I salute u nd love u. 423 matches, 23 yrs, 18426 runs !!!! These numbers no body else wil be able to come close to. salute salute salute to sachin.” 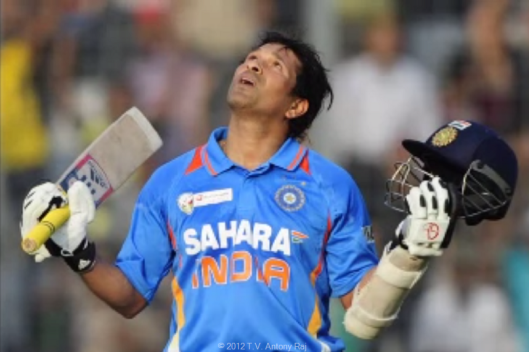 Yesterday, Friday March 16, 2012, playing in the 4th One Day International match of the Asia Cup 2012 against the hosts Bangladesh, Sachin Tendulkar scored a century thus becoming the only man in the history of the sport to score 100 centuries in international cricket. He took the single off Shakib Al Hasan of Bangladesh and finally achieved the elusive milestone.

Indian Prime Minister Manmohan Singh congratulated the Master Blaster saying, “I join the nation in congratulating Sachin Tendulkar on his making history – a hundred centuries… He has made India proud. Tendulkar’s long career has been a triumph of class, character and courage. Wish him many more innings and feats to continue inspiring the youth.”

“On behalf of every cricket fan around the globe, I congratulate Sachin on becoming the first person to score 100 centuries for his country. This is indeed a magnificent feat and not likely to be easily emulated,” said Lorgat.

“Fans have admired Sachin for more than 20 years and have recently waited with great expectation for his 100th international century. The number 100 is special for a batsman and to record 100 centuries for your country is a massive statement.”

Lorgat also said that Tendulkar was a marvel to cricket lovers around the world and a true role model.

“Like millions of others, I have personally followed his career ever since he first played for India as a gifted 16-year-old and now, more than two decades later, his passion and personal records, which include more than 33,000 runs at international level, is a modern-day wonder.

“He is a marvel to cricket lovers around the world and with an array of batting records, Sachin is a true role model who will undoubtedly hold a special place in cricket’s history,” he said. (PTI)

The Board of Control for Cricket in India (BCCI) President N Srinivasan heaped praises on Sachin Tendulkar for becoming the first cricketer in the world to score 100 international centuries and said that 16th March 2012 would never be forgotten.

“Ever since he made his international début in November 1989, Sachin Ramesh Tendulkar has strode cricketing arenas the world over, like a colossus. He has broken old records and set new benchmarks. He has been an inspiration to billions, and an ornament to the sport,” said Srinivasan.

“16 March 2012 will never be forgotten by cricket-lovers. On behalf of the BCCI, I would like to congratulate Sachin Tendulkar for completing a century of international centuries,” he added. (PTI)

And bollywood? Of course it went crazy and started twitting.

“God’s special creation …Sachin Tendulkar!! India breathes normally..!! Sachin completes an incredible feat!! A hundered 100’s…Never done before, perhaps never after!!!” said Amithab Bachchan.  “A lion does not concern himself with the opinions of the sheep,” the megastar tweeted hinting at Sachin’s critics.

And his son Abhishek Bachan tweeted, “How good is Sachin? he’s the best. period! stop analyzing him. stop being cynical. just celebrated him!”

The 82-year old Queen of Melody, Lata Mangeshkar, twitted: “A big congratulations to Sachin. He has once again created history with his superb innings.”

Actress Bipasha Basu tweeted:  “Saluting The Great Tendulkar for his 100th 100! We stropped our shoot to see it happen! Jubilant and Ecstatic.”

Action hero Akshay Kumar tweeted, “Salute to the man who never gave up in spite of all the criticisms. Finally he did it, Sachin creates history in world cricket! Congrats to Sachin Hundredkar.”

Tendulkar scored his 99th international hundred more than a year ago on home soil. It took him more than one year to reach the milestone of scoring 100 centuries in international cricket.

His 49th ODI hundred in Dhaka brought up a unique century of centuries that no other player is close to achieving. Former Australian captain Ricky Ponting is next best with 71 international centuries, and South Africa’s Jacques Kallis trails behind him with 59.

In the 1990s, Adidas signed world’s iconic batsman Sachin Tendulkar of India and made shoes for him. Tendulkar still wears Adidas shoes while playing matches. Since 2008, Adidas has sponsored the cricket bat used by Sachin Tendulkar. It created a new bat, ‘Adidas MasterBlaster Elite’, personalized for him.