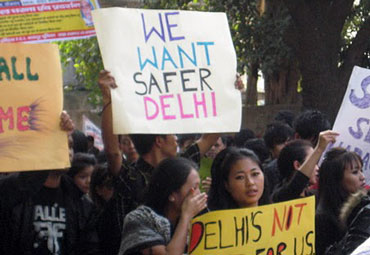 North East Support Centre and Helpline Team has been receiving calls from different areas in Delhi. The callers claimed that some people from the Northeast were killed last night in some areas of Delhi. North East Helpline Team checked with the Delhi Police, Media and friends and none of them is confirmed.

So, once again, invisible communal forces are trying to mislead the nation by such rumours. It is our duty to stop them immediately.

We appeal to all sections of society, particularly to the people from Northeastern states of India not to believe any information that may be passed on to you. Please confirm whether it is true or not. You may call the Police Helpline No. 100, or contact your responsible community and student leaders. Rumours will only add more fuel to the present uneasy situation prevailing in our beloved country.

Since last week, as many as 30,000 people from the northeast have fled from Bangalore. The exodus was triggered by rumours of attacks. The city is now under heavy security. To instill trust in the minds of the panic-stricken Northeasterners, as many as 17,000 police force, supported by Rapid Action Force are standing by. The Karnataka State Reserve Police, has been recalled for active duty.

A few days ago, Indian Railways, ran additional train services to Guwahati to meet the sudden onrush of fleeing Northeasterners. However, for the past two days, they did not operate any special services. Travelers from Bangalore are now being told to board the Yeshwanthpur – Howrah Express from Yeshwanthpur and then proceed to Guwahati from Howrah.

On Sunday night, Mr. R. Ashoka, Deputy Chief Minister and Home Minister of Karnataka went on rounds with top police officials. He visited places largely populated by people from the northeastern states. He said that he would work incessantly to ensure their safety.

On Monday August 20, the police and the railway authorities in Bangalore said that the exodus of North-easterners back to their home-states seemed to have ended. This they believed was due to the scaled-up security along with measures implemented to create confidence. 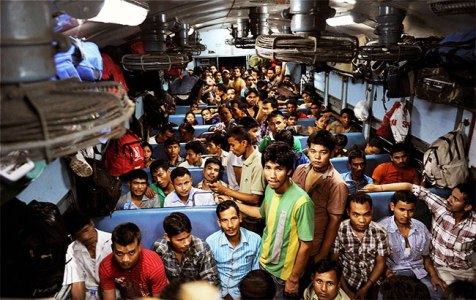 Thousands of workers and students from Assam and other northeastern states living in Maharashtra, Karnataka, Andhra Pradesh, Kerala have already left for their native places. This was due to the threat spread via SMS, that a set of miscreants probably would seek them out after Eid. This has prompted the Assam government to stay on high alert to reduce recurrence of violence after Eid.

On Sunday, August 19, Tarun Gogoi, Chief Minister of Assam convened a high-level emergency meeting attended by the State Chief Secretary N.K. Das, Director General of Police J.N. Chaudhury, three former DGs of Assam law enforcement and government officials. The Chief Minister informed them that in Jalpaiguri area of West Bengal, miscreants killed four people and injured at least nine others in an Assam-bound special train originating from Bangalore. The train that was among three Bangalore-Guwahati specials, which were coming to Assam, had reached Guwahati that Sunday morning.

The chief Minister then told them that Assam government had dispatched officials to Jalpaiguri area to find out what exactly triggered the death of the four people. He said that occurrence of fresh violence that could erupt as soon as the Eid festivity comes to an end in the state worried him. He asked his officials to set up a contingency plan straight away to meet any emergency that could happen in the next few days.

In the meantime, the Assam government has asked the Indian Railways not to offer any more special trains from any state to Guwahati for the panic-stricken people from the region. The Chief Minister said most people who had come due to panic were now eager to return to their workplaces and educational institutes outside the state.

In July 2012, ethnic violence in the north-eastern Indian state of Assam erupted between the Bengali-speaking Muslim immigrants and the indigenous Bodos. Nearly 80 people died during last month alone. 400,000 people have been displaced from almost 400 villages, and are sheltered in 270 relief camps.

The Muslim population in the North-East consists of refugees who migrated before the Indo-Pakistani war of 1971 from the erstwhile East Pakistan. Currently, Rohingya Muslims from Bangladesh, are infiltrating into the region. This violent outbreak is due in part to the rising ethnic nationalism (most notably Bodo nationalism) and diaspora politics

On 27 July 2012, Assam’s Chief Minister Tarun Gogoi blamed the national government for its delay in sending the army to riot-hit areas. The following day, Prime Minister Manmohan Singh visited the relief camps in Kokrajhar and said the recent violence is a blot on the face of India.

On 11 August 2012, a protest was organised by the Raza Academy against the attacks on Muslims in Assam and in Myanmar was held at Azad Maidan in Mumbai. The protest was attended by two other groups, Sunni Jamaitul Ulma and Jamate Raza-e-Mustafa. It ended in violence, leading to two deaths and 54 injured including 45 policemen. The most disturbing images were those of miscreants demolishing the “Amar Jawan Jyoti” a symbol of Indian Valour.

Now, the people from the North-East living in cities like Bangalore, Hyderabad and Pune are on their guard against aftershocks and repercussions. Thousands of people are fleeing the southern city of Bangalore amid rumours. They said that text messages were circulating, which warned of attacks by Muslims in retaliation for communal violence in their home state.

However, leaders from the Bangalore’s Muslim community assured students from the North-East with regard to their personal safety in Bangalore. Because panic-stricken men and women from the North-East continue to get out of Bangalore, leaders of the local Muslim community talked with student representatives and assured them that there would be almost nothing to be worried. Akbar Ali, convener of the Muslim welfare association said those people who seriously feel quite unsafe in their home are welcome to come to the homes of Muslims and to the mosques to take shelter. Ali also told the students that there was no need to worry. “We will protect you, but please do not leave the city. It is your city as much as ours,” reassured Ali.

Hundreds of students and workers from Assam thronged Bangalore’s main railway station on Thursday to try to board trains leaving the city, while officials tried to assure them of their safety.

The Central government and the Karnataka State government say emphatically that there is no need for the people from the North-East living in Bangalore to return to their homes as there is no imminent threat to them in the City.

The police are monitoring social-networking sites to find those creating this panic. Though the level of panic has come down as compared to Wednesday, people continue to leave the city. People from the North-East say that as per the messages or rumours being circulated, the attacks could come after the 20th of this month; hence, they did not want to be here at that time. However, the Bangalore police say that no incidents have been reported on any attack on citizens from the North-East in the city. Their message says, “Do not panic or heed to rumours. In case you need help, please call the control room.”

The state administration, on the other hand, is doing all it can to assure the panic-stricken people that they were safe within the city. Law Minister, Suresh Kumar, when contacted informed that he met with most of the people at the railway station and assured them of their safety. Most of the people want to go home to their parents as there have been incidents that prompted them to leave the city.The latest developments:

(With inputs from Agencies)