Woman is the companion of man, gifted with equal mental capacity… If by strength is meant moral power, then woman is immeasurably man’s superior… If non-violence is the law of our being, the future is with women… – Mahatma Gandhi 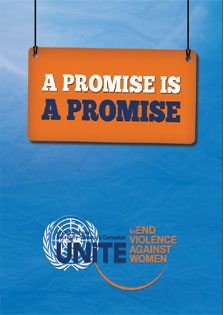 On March 8th every year, the day originally known as the International Working Women’s Day, people around the world celebrate International Women’s Day (IWD) focusing on respect, appreciation and love towards women and to celebrate the achievements of women in economic, political and social arena without regard to divisions, whether national, ethnic, linguistic, cultural, economic or political. It is an occasion for looking back on past struggles and accomplishments of women, and for looking ahead to the untapped potential and opportunities that await future generations of women.

As part of the effort the UN leads to fight violence against women, UNiTE campaign, the United Nations Secretary-Generals Ban Ki-moon’s “Unite to End Violence Against Women” calls on all governments, civil society, women’s organizations, men, young people, the private sector, the media and the entire UN system to join forces in addressing this global pandemic.

The song “One Woman” written for UN Women and performed by acclaimed singers and musicians from China to Costa Rica, from Mali to Malaysia spreads a message of unity and solidarity. The song is a rallying cry to inspire listeners to join the drive for women’s rights and gender equality, and overcome violence and discrimination against women.