A couple of days ago, these letters were faxed once again to the White House by Mohammed Adeeb, independent Rajya Sabha MP of Uttar Pradesh in view of president of Bharatiya Janata Party, Rajnath Singh’s on going visit to America.

Now, it has emerged that the letter could have been faked. Some critics say that these MPs having not written any letter to their party leaders, or to the Prime Minister, or to the president for the development of their own constituencies had found the time to sign a petition to President Obama, thus bringing shame to the nation.

Some newspapers carried the entire list of MPs who have signed the letter. Copies of the letters were provided by the Indian American Muslim Council (IAMC).

Here are the facsimiles of the letter sent to Obama: 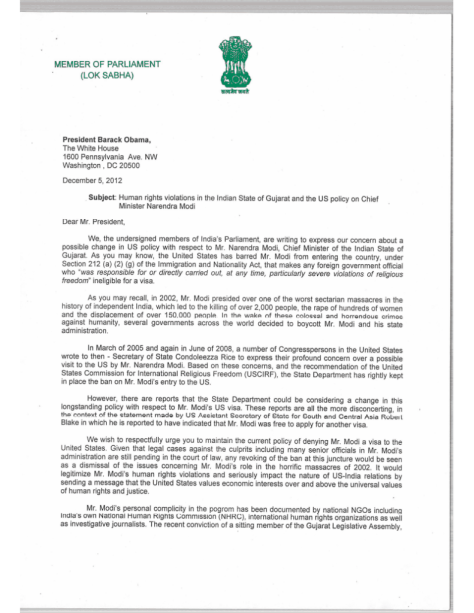 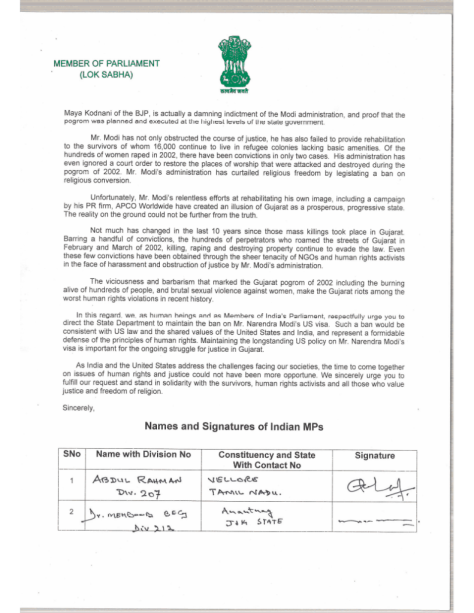 Names of the 65 MP’s,  House & Party who sent petition to Obama

According to CPI-M leader Sitaram Yechury his signature on the letter “appears to be a cut and paste” job. Some of the other MPs whose names were said to be in the list have denied doing so. On Wednesday, M.P. Achuthan (CPI) and MP K.P. Ramalingam (DMK) said they did not sign the letter.

However, Mohammed Adeeb, who took the initiative for this campaign, insisted that Yechury and Achthan had signed the letter and was surprised why they were retracting now.

There seems to be an anomaly in the lists. At first glance it looks like the lists contain signatures of 65 MPs, but actually only 64 MPs are listed. Look at the first row of the Rajya Sabha list. It is blank.