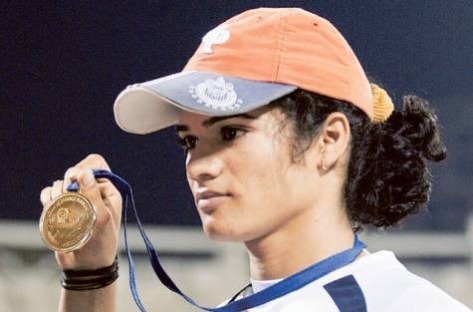 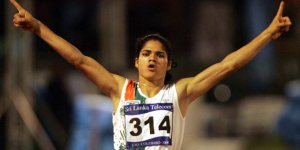 Her first success was at the age of 17 when she won two bronze medals at the Asian Indoor Athletics Championships. She was chosen to represent Asia at the IAAF World Cup.

In domestic athletic events she has won three times at the All-India Open National Championships. After 2007 she rarely competed due to a series of injuries and a car crash.

Pinki was arrested on June 14, 2012 in West Bengal after she was accused of being a man by her live-in partner, a 30-year-old estranged woman, who also alleged that Pinki raped her.

On June 15, 2012, she was remanded to 14 days judicial custody. Pinki was lodged in Dumdum correctional home since June 15, after her bail plea was turned down by the same court.

This led to medical tests to determine her gender at a private nursing home in North 24 Parganas district where the sprinter was taken subsequent to her arrest. Subsequently, a 29-second MMS showing the athlete completely naked and undergoing tests at the private nursing home went viral online.

The tests conducted at the district hospital were inconclusive. Initial private tests claimed to show Pinki to be male. Pramanik disagreed with these results and police ordered a separate government-led test as part of the trial. The Court then directed a chromosome pattern test. She was then taken to the Seth Sukhlal Karnani Memorial Hospital (SSKM Government Hospital) in Lala Lajpat Rai Sarani, Kolkata, where an 11-member medical board carried out tests.

Today (July 10, 2012), the 11-member medical board of the SSKM Government Hospital, formed to determine the gender of Pinki Pramanik, has concluded that the athlete has predominantly male features. This came on a day a local court in Barasat granted Pramanik bail in the rape case.

After the Karyotyping — a chromosomal test — was conducted at the West Bengal University of Technology, the reports were sent to the SSKM Hospital on Monday. On Tuesday, the hospital’s medical board went through the reports and concluded that Pramanik has 46, XY Karyotype which is common in a normal male.

A member of the medical board, who did not want to be named, told The Indian Express, “Normal Karyotypes for females contain two X chromosomes and are denoted as 46, XX. Males have an X and a Y chromosome and are denoted 46, XY. Tests reports revealed that Pramanik has predominantly male features. The test reports, along with our observations, has been submitted to the court.”

“At the same time, Pramanik has the disorder of sexual development. In medical science not everything can be said in black and white. This case has shades of grey. Pramanik does not have all the features that a normal adult male has,” the doctor said. Asked if such a person can rape someone, he said that it was “very difficult” to tell.

However, Tuhin Roy, Pinki’s lawyer, said that based on the medical reports, the district and sessions judge’s court held that the athlete is “physically incapable of committing rape” and granted Pramanik bail after 25 days in custody.

Today, members of women’s forums and former athletes gathered in front of the court and demonstrated, demanding Pramanik’s immediate release.

Pinki Pramanik appears to have a following in Bengal. Some amount of discontent is building up in the country regards to the treatment given to Pinki Pramanik.

Activists say the government is doing nothing to protect a woman in police custody.

On Friday July 6, former athletic champions from Bengal, Jyotirmoyee Sikdar and ace swimmer Padma Shri Bula Chowdhury Chakraborty, came out in the open to rally around Pinki Pramanik, claiming that the athlete’s human rights have been violated and that she deserves a more dignified treatment.

Rebel Trinamool Congress MP Kabir Suman has taken up cudgels for the Asiad gold medallist sprinter. He has composed a bitterly sarcastic song on the Asian Games gold medallist. It goes like this:

(You have earned gold and silver for the country.
You did the country proud, winning medals in relay races, but we don’t want to remember that.
The video grab of your gender test is the talk of the town.
It’s doing a jig on the internet)

Meanwhile, a four-member team of the West Bengal Commission for Women, led by its chairperson Sunanda Mukherjee, met the athlete in prison during the day.

“After speaking to her, we realised that there have been several instances of violation of women rights. Ms. Pramanik was kept in the prison without any female police personnel and was referred to as a male in police records,” she said.

Earlier, representatives of civil rights groups and sportspersons raised concern over Ms. Pramanik’s alleged mistreatment at the hands of the police.

While the Calcutta High Court had asked the State government to file an affidavit in connection with the case, the West Bengal Human Rights Commission asked for a report from the State’s Home Secretary and the Director General of Police.

To add fuel to the fire, Madan Mitra, Hon’ble Minister of Sports (Independent Charges) and MoS Fisheries said today, “I have not received anything from Pinki Pramanik’s family, nor from any sports organisation. Nobody has talked to me or written to me saying that what is going on is illegal.”