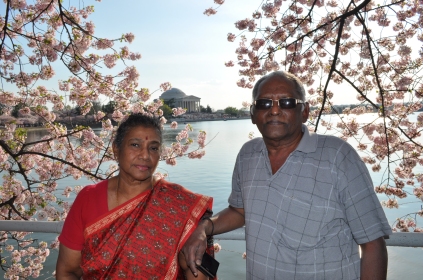 The year 2012 is a once in a lifetime centennial celebration year to commemorate the gift of 3,020 cherry blossom trees from the people of Japan to the people of the United States.

A century ago, a world-famous chemist and first president of Daiichi Sankyo Co, Ltd, Dr. Jokichi Takamine, played a pivotal role in arranging the gift of trees from the City of Tokyo to Washington, DC.

On March 27, 1912, Mayor Yukio Ozaki of Tokyo City donated the trees to enhance the growing friendship between the United States and Japan and to celebrate the continued close relationship between the two nations.

First Lady Taft and the Viscountess Chinda, wife of the Japanese Ambassador, planted the first two cherry trees on the northern bank of the Tidal Basin. These two original trees are still standing today near the John Paul Jones statue at the south end of 17th Street. Workmen planted the rest of the trees around the Tidal Basin and East Potomac Park. Even after a century the trees have spread their roots and survived the elements, and have withstood the test of time.

This year the centennial celebration of the gift of trees will be celebrated from  March 20 – April 27, 2012, in Washington, DC.

On March 23, 2012, my wife and I were in Washington, DC. We felt blessed to be in US during this centennial of the gift of trees. I took countless photographs that day.

Here I have embedded a video that I created using my photos. It was an unforgettable evening that we spent surrounded by cherry blossom. The music playing in the background is one that I enjoy listening without tiring – Carlos Santana’s ever green “Flor D’Luna (Moonflower)“.