The asteroid about 1.7 miles (2.7 kilometers) or nine Queen Elizabeth 2 ship-lengths in size in length has the physical mass to potentially knockout life on Earth. However, we are safe as it is just flying by. 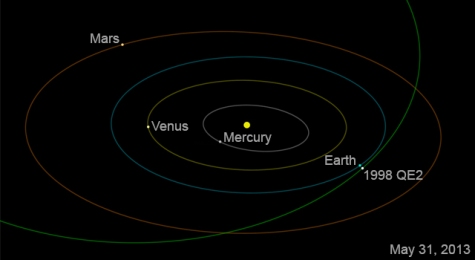 On May 31, 2013, at 20:59 UTC (1:59 p.m. Pacific / 4:59 p.m. Eastern) this asteroid will pass within 3.6 million miles (5.8 million km) of Earth – about 15 times the distance to the Moon. While this may seem a great distance for the layman, in astronomical terms it is a mere stone’s throw away. This is the closest approach the asteroid will make to Earth for at least the next two centuries.

The Massachusetts Institute of Technology Lincoln Near Earth Asteroid Research (LINEAR) program near Socorro, New Mexico, discovered this asteroid on August 19, 1998. It is officially known as Asteroid 1998 QE2. It is not named in honor of Queen Elizabeth II, or after that 12-decked, transatlantic-crossing flagship for the Cunard Line. The name was assigned by the NASA-supported Minor Planet Center in Cambridge, Massachusetts, USA. This institute assigns each newly discovered asteroid a provisional designation starting with the year of first detection, along with an alphanumeric code showing the half-month it was discovered, and the sequence within that half-month.

Though this asteroid is not of much interest to those astronomers and scientists on the lookout for hazardous asteroids, it is of interest to those who dabble in radar astronomy and have a 230-foot (70-meter) or larger radar telescopes at their disposal.

Radar astronomer Lance Benner, the principal investigator for the Goldstone radar observations from NASA’s Jet Propulsion Laboratory in Pasadena, California said: “Asteroid 1998 QE2 will be an outstanding radar imaging target at Goldstone and Arecibo and we expect to obtain a series of high-resolution images that could reveal a wealth of surface features … Whenever an asteroid approaches this closely, it provides an important scientific opportunity to study it in detail to understand its size, shape, rotation, surface features, and what they can tell us about its origin. We will also use new radar measurements of the asteroid’s distance and velocity to improve our calculation of its orbit and compute its motion farther into the future than we could otherwise.” 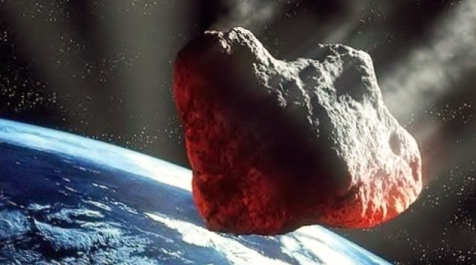 Asteroids come in various sizes and shapes: dog bones, bowling pins, spheroids, diamonds, muffins, potatoes, etc. Between May 30 and June 9, radar astronomers using NASA’s 230-foot-wide (70 meter) Deep Space Network antenna at Goldstone, California, and the Arecibo Observatory in Puerto Rico, are planning an extensive campaign of observations. The two telescopes with complementary imaging capabilities will enable astronomers to study 1998 QE2 and what it looks like during its brief flyby.

The small near-Earth asteroid named 2012 DA14 discovered on February 23, 2012, by the OAM Observatory, La Sagra in Spain with an estimated diameter of about 45 meters (about half the size of a football field) weighing about 130,000 metric tons mass probably made of stone in contrast to metal or ice is now hurtling towards the earth. It will pass within about 3.5 Earth radii of the Earth’s surface inside the geosynchronous satellite ring, located about 35,800 kilometers above the equator.

Tomorrow, February 15, 2013, when it passes within 17,200 miles (28,000 kilometers) of Earth, it will not be visible to the naked eye, but will be within range of small telescopes and solidly mounted binoculars, used by experienced observers who have access to appropriate star charts. Here is a note from NASA about the asteroid’s visibility:

On [February 15, 2013], the asteroid will travel rapidly from the southern evening sky into the northern morning sky with its closest Earth approach occurring about 19:26 UTC when it will achieve a magnitude of less than seven, which is somewhat fainter than naked eye visibility. About 4 minutes after its Earth close approach, there is a good chance it will pass into the Earth’s shadow for about 18 minutes or so before reappearing from the eclipse. When traveling rapidly into the northern morning sky, 2012 DA14 will quickly fade in brightness.

Clay Center Observatory will be offering real-time high-definition video, from 22:00 UTC (6 p.m. EST) February 15 until 8:00 UTC (4 a.m. EST) on February 16. The video feed can be freely accessed worldwide via Clay Center Observatory’s Ustream channel. The observatory has also set up a countdown clock to show how much time remains until the tracking begins.

Virtual Telescope Project, which calls itself “the most active facility in the world in astronomical science and education,” will also be following 2012 DA14 on February 15, 2013.

Will anything happen when asteroid 2012 DA14 comes close to Earth? Nothing. According to Paul Chodas, Jon Giorgini and Don Yeomans of NASA/JPL Near-Earth Object Program Office the asteroid will not impact the Earth on February 15, 2013.

The asteroid will have no effect on the tides. It will not cause volcanoes to erupt. It will not trigger earthquakes and tsunamis. Though the asteroid will just hurtle closely past Earth only 17,000 miles away – within the orbits of geosynchronous satellites, most of us will not see it, and we will not be aware of it at all.

Comets and asteroids that enter the Earth’s neighborhood nudged by the gravitational attraction of nearby planets are known as near-Earth Objects (NEOs).

One such near-Earth asteroid named 4179 Toutatis formerly known as 1989 AC was discovered by Christian Pollas on January 4, 1989, at Caussols, France. On
December 12, 2012, this asteroid with a shape of a “malformed potato” tumbled through space like a fumbled football, within 4.3 million miles from Earth.

Another near-Earth asteroid discovered on February 23, 2012, by the OAM Observatory, La Sagra in Spain with an estimated diameter of about 45 meters (about half the size of a football field) weighing about 130,000 metric tons mass probably made of stone in contrast to metal or ice is now hurtling towards the earth.

On February 15, 2013, this asteroid labeled 2012 DA14 will pass within about 3.5 Earth radii of the Earth’s surface inside the geosynchronous weather and communication satellites ring, approximately 35,800 kilometers above the equator.

Even though asteroids like 2012 DA14 fly past Earth almost every 40 years they impact with our planet only every 1200 years or so. Don Yeomans, Paul Chodas, and Jon Giorgini of NASA/JPL Near-Earth Object Program Office after predicting the asteroid’s path have declared that according to their observations, there is no chance that the asteroid might be on a collision course with the Earth, and it will safely fly past Earth’s outer ring of satellites on February 15.

“Since regular sky surveys began in the 1990s, we’ve never seen an object this big gets so close to Earth,” Don Yeomans said.

On February 23, 2012, the OAM Observatory, La Sagra in Spain discovered a near-earth asteroid with an estimated diameter of about 45 meters and about 130,000 metric tons mass hurtling towards the earth. On February 15th, 2013, this asteroid named 2012 DA14 will pass within about 3.5 Earth radii of the Earth’s surface inside the geosynchronous satellite ring, located about 35,800 kilometers above the equator. According to Paul Chodas, Jon Giorgini and Don Yeomans of NASA/JPL Near-Earth Object Program Office the asteroid will not impact the Earth on February 15, 2013.

As per calculations, on February 15, 2013, the distance between the asteroid and the Earth will be 0.09 Lunar Distance (35,000 kilometers; 21,000 miles) and travel rapidly from the southern evening sky into the northern morning sky. Its closest Earth approach to Earth would occur at 19:26 UTC achieving magnitude of less than seven; somewhat fainter than naked-eye visibility. Four minutes later 2012 DA14 after passing into the Earth’s shadow for 18 minutes it will reappear from the eclipse, travel swiftly into the northern morning sky and would disappear.