William Marshall Brown, a distinguished Scottish artist was born on January 3, 1863 in Edinburgh.

While working as a wood engraver and book illustrator, Marshall Brown studied art at the Edinburgh College of Art and at the Royal Scottish Academy Life School.

Though he painted landscapes and portraits, he is best known for his atmospheric figurative work with a background of landscapes or seascapes.

In 1888, Marshall Brown received the Chalmers Bursary and Stewart Prize.

Marshall Brown worked mostly in Scotland and lived for some time in Edinburgh and at Cockburnspath in Berwickshire. Though not a native of East Lothian like many other artists, he too captivated by the coast, the landscape and its inhabitants spent many years working in the county. Many of his paintings such as the farm workers, fisher girls, etc., were characteristic of his times. And, the East Lothian connection can often be seen in the details like the bonnets, creels, and baskets.

Like many of his Scottish contemporaries, Marshall Brown made frequent trips to Holland and Brittany in France. In “A Breton Washing Pool,” Marshal Brown has captured a group of Breton women working on the shoreline, possibly near the town of Concarneau.

He created his work “Sardine Fishers” in Concarneau, France.

Here are some works of William Marshall Brown:

I thank hovercraftdoggy.com for introducing me to the paper bird sculptures of the 24-year-old Colombian artist Diana Beltran Herrera.

Diana has created a series of vibrantly colored feathered friends. Trained in industrial design, she has created an ever growing collection of imaginary and actual species of birds. Now this hobby has become a full-time project for her.

Diana says: “I have chosen to study birds in many places: simple pieces of paper transform into real birds with bright colors. The study moves between two addresses: the movement and surprise. Birds are often built in places and environments, which highlights the symbolic from the idea of ​​movement. It is at that moment capture the wonder of the things that are made and moments, thus stimulating thought processes in the viewer. The use of paper as a material for the construction of these sculptures perfectly adapted to the chosen themes, convey to the viewer the impression of freedom and lightness. The role that loaded itself the concepts of temporality and fragility. Then, the process that allows me general these visual documents of facts, has a life and a transformation process, the same process that has issues that I talk in my work.

I’m worried about the lack of interest that humans have lately regarding the nature, and with my work, I hope to help in thinking about these things that will disappear soon.” 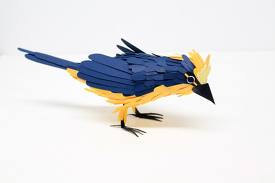 Here are some pages you can click on to see the fantastic creations of this talented artist: