I have played with him long enough to understand his approach, but I am amazed at the man’s zeal. He wants to be perfect always. His humility is amazing. I have seen Sachin carry drinks for the junior most, much to the embarrassment of the youngster. His discipline is infectious. For Mumbai nets, he comes in the Mumbai training gear. He would never don an India cap or T-shirt for a Mumbai match. He will also not allow anyone to carry his cricket coffin.” – Pravin Amre (Sachin Tendulkar’s coach at Mumbai)

Raj Singh Dungarpur a former president of the Board of Control for Cricket in India introduced 16-year-old Sachin Ramesh Tendulkar to the world of cricket. The BCCI selection committee under the chairmanship of Dungarpur chose Sachin Tendulkar for the 1989 Indian tour of Pakistan

On his international Test debut in November 1989, Sachin Tendulkar was 16 years 205 days of age, the third youngest cricketer to make his first appearance in international cricket. Mushtaq Mohammad of Pakistan has the honour of being the first youngest person to play Test cricket at 15 years and 124 days; however, there exists some doubt about his exact age at his debut. The second youngest Test Player Aaqib Javed debuted at 16 years 189 days. Since then there have been two players who were younger than Sachin on the day of their cricket Test debut: Mohammad Sharif of Bangladesh (15 years 128 days), and Hasan Raza of Pakistan (14 years 227 days).

Sachin Tendulkar played his first Test match against Pakistan in Karachi. He made just 15 runs bowled out by Waqar Younis, who also made his debut in that match. Cricket critics commended Sachin for braving numerous blows to his body at the hands of the Pakistani pace attack in this series. In the final test in Sialkot, though hit on the nose by a bouncer, he declined medical assistance and continued to bat, with a bleeding nose. In that Test series, Sachin scored 215 runs in all at an average of 35.83.

In a 20 over exhibition game in Peshawar, Tendulkar scored 53 runs off 18 balls, including an over in which he scored 27 runs off Abdul Qadir. The then Indian captain Krishnamachari Srikkanth later recalled this match as “one of the best innings I have seen.”

On August 14, 1990, in his 9th international test appearance Sachin Tendulkar scored his maiden Test century vs. England at Old Trafford, Manchester. He was 119 not out in the second innings. This innings is particularly noteworthy as it helped India to clinch an honorable draw in the face of a certain defeat. 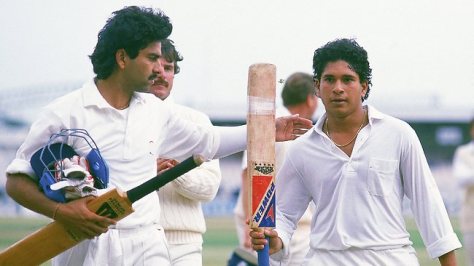 At that time, Kapil Dev held the record for the youngest Indian centurion.  On January 24, 1979 Kapil Dev scored 126* with four fours and one six in a drawn match against West Indies at Feroz Shah Kotla Ground, New Delhi.

When Sachin Tendulkar scored his maiden century in 1990, he was the second youngest to score a century in international Test cricket.

Mushtaq Mohammad of Pakistan set the first record as the youngest to score a century in his 6th Test with 101 runs against India in Feroz Shah Kotla Ground, New Delhi when he was just 17 years and 78 days old.

Mohammad Ashraful of Bangladesh bettered Mushtaq’s record that stood for over 40 years. Ashraful made his Test debut on 6 September 2001 against Sri Lanka. He  top-scored in each innings. Although Bangladesh slumped to an innings defeat, Ashraful scored 114, and in the process became the youngest player to score a Test century, beating Mushtaq Mohammad’s record and the second Bangladesh player to score a Test century on debut, the first since Aminul Islam Bulbul in 2000 during Bangladesh’s first Test.