The above painting opened my eyes to the world of art. I am not a connoisseur of art nor do I pretend to be one but do you see anything wrong in this drawing of Adam and Eve?

I couldn’t but exclaim “What? Adam and Eve with belly buttons? The artist was a dumb idiot!”

But the artist who painted it was an educated person named Lucas Cranach the Elder, a German Renaissance painter and graphic artist who excelled in portraits and in female nudes.

Lucas Cranach the Elder was the foremost member of the family of artists by that name active in Saxony during the 16th century.

From about 1501 to 1504 Lucas Cranach lived in Vienna, and his earliest known works date from this period. They include a portrait of the Wife of Dr Johann Stephan Reuss (1503), found in the collection of Staatliche Museen, Berlin and The Crucifixion (1503, Alte Pinakothek, Munich).

In 1505 Cranach became court painter to the electors of Saxony at Wittenberg until 1550. He was a prominent citizen in Wittenberg, received a title, and became mayor in 1537. In 1508 he visited the Netherlands, where he painted portraits of such royalty as Holy Roman Emperor Maximilian I and the young prince who succeeded him as Charles V. He painted biblical and mythological scenes with decorative sensual nudes that were new to German painting. These works include many versions of Adam and Eve, The Judgment of Paris (1528, Metropolitan Museum, New York), and nearly 20 versions of Venus and Cupid from 1527 to 1545.

Lucas Cranach was a friend of Martin Luther, and his art expresses much of the spirit and feeling of the German Reformation. Cranach ran a large workshop and worked with great speed, producing hundreds of works. He died in Weimar, on October 15, 1553. Cranach’s sons were both artists, but the only one to achieve distinction was Lucas Cranach the Younger, who was his father’s pupil and often his assistant. His oldest son Hans Cranach was a promising artist but died prematurely.

Here are some of the paintings of Adam and Eve by Lucas Cranach the Elder.
. 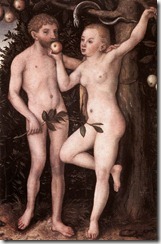 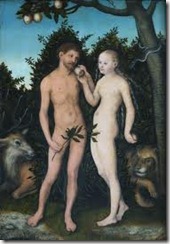 Other artists who spent time drawing the navels

Out of curiosity, I searched Google for images of ‘Adam and Eve’ by other artists and I was shocked to find that almost all the painters of the renaissance period including Michelangelo drew gracefully and spent time in drawing meticulously the navels of Adam and Eve.

To prove my point I downloaded many pictures and have posted some of them here. Like most of you, I am just a layman who admires the beautiful forms drawn by them.

Three centuries after the fresco was painted, Cosimo III de’ Medici, in line with contemporary ideas of decorum, ordered that fig leaves be added to conceal the genitals of the figures. These were eventually removed in the 1980s when the painting was fully restored and cleaned.

Albrecht Dürer  (May 21, 1471 – April 6, 1528) born in Nuremberg was a German painter, printmaker, and theorist of the German Renaissance. In his twenties, he established his influence and reputation throughout Europe with his excellent woodcut prints. Dürer was in touch with the major Italian artists of his time, including Giovanni Bellini of the Bellini family of Venetian painters, Raffaello Sanzio da Urbino alias Raphael, and Leonardo da Vinci. From 1512 Emperor Maximilian I patronized him.
.

Michelangelo di Lodovico Buonarroti Simoni (6 March 1475 – 18 February 1564), commonly known as Michelangelo was an Italian Renaissance sculptor, painter, architect, poet, and engineer who exerted an unparalleled influence on the development of Western art. Despite making few forays beyond the arts, his versatility in the disciplines he took up was of such a high order that he is often considered a contender for the title of the archetypal Renaissance man, along with fellow Italian Leonardo da Vinci.

Michelangelo was considered the greatest living artist in his lifetime, and ever since then, he has been held to be one of the greatest artists of all time. A number of his works in painting, sculpture, and architecture rank among the most famous in existence. His output in every field during his long life was prodigious; when the sheer volume of correspondence, sketches, and reminiscences that survive is also taken into account, he is the best-documented artist of the 16th century. Two of his best-known works, the Pietà and David, were sculpted before he turned thirty. Despite his low opinion of painting, Michelangelo also created two of the most influential works in fresco in the history of Western art: the scenes from Genesis on the ceiling and The Last Judgment on the altar wall of the Sistine Chapel in Rome. As an architect, Michelangelo pioneered the Mannerist style at the Laurentian Library. At 74 he succeeded Antonio da Sangallo the Younger as the architect of St. Peter’s Basilica. Michelangelo transformed the plan, the western end being finished to Michelangelo’s design, the dome being completed after his death with some modification.

My former student Chandru Ganapathy has shared Amey Rane‘s post on Facebook. It is a transmutation of the nursery rhyme “Johnny, Johnny …” I hope novices and veterans in the IT field will chant it as their daily mantra. Here it is:

Too much work … Yes Papa!

This what you would hear from a couple cooing and crooning behind the bushes. Obviously before marriage:

He:  Yes. I have been waiting all these days for this only.
She: Will you think of leaving me?
He:  No. Never. I will not even dream of it.
She: Do you love me?
He:  Yes. Today and forever.
She: Will you cheat on me?
He:  I would ratherI die.
She: Will you kiss me?
He:  Surely. What a happy instance this would be!

She: Will you scold me?
He:  Never. Don’t ever think of it?
She: Will you hold my hand and walk with me till the end?

Read upwards.
This is the same conversation that we heard afore, But now it has metamorphosed into a conversation after marriage.

Yesterday, my son suggested that we go shopping at IKEA. Though it was sunny and cloudless, the temperature outside the car was 45° F (7° C) and freezing.

Before coming over to the United States, I thought that everyone here had enough monetary resources. But, on our way to College Park, the image in my mind of an affluent United States of America shattered.

Do you see the woman in the centre of the above photo standing in the middle of the road holding a placard? 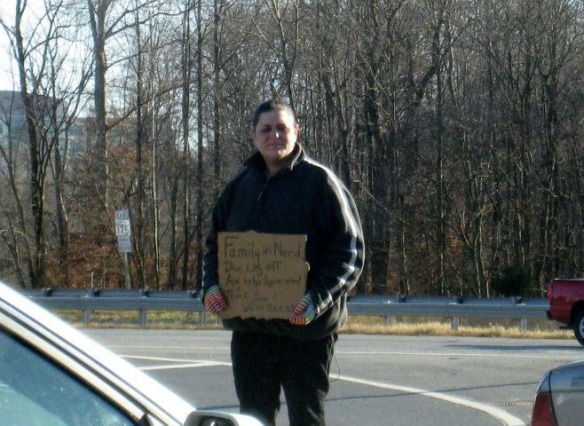 Since we were in the third lane. I could not read what was written. So, I zoomed in with my camera.  What I read shocked me.

Family in Need
Due Lay off
Any help Appreciated
Thank you
God Bless.

While in India, I thought the United States of America was a land flowing with milk and honey. But now I realize that this country is no different from any country in Asia. It too has its own quota of poor people! 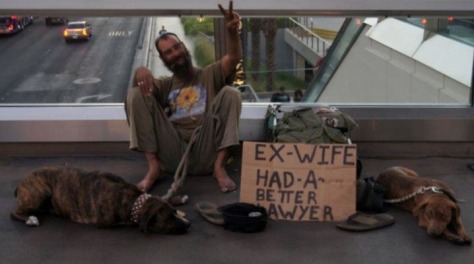 In a lighter vein, my former student Keerthi Jeyaraj posted the above picture on Facebook. He says:

“Quite common here…I see a lot of such ppl with hoardings in Manhattan… the best part I saw was at Vegas… a beggar had a board in front of him that said:  ‘My Ex-wife had a better lawyer’.

I took these photos on 14 and 15 January 2012 while travelling in my younger son Subas Raj’s car.

Initially, occupying the front seat while my son drove his Honda CRV smoothly between 60 and 70 mph, I felt a bit jittery being not used to left-hand driving.

I really admire the clean streets over here in the United States – not a bit of paper or piled garbage could be seen. The roads are smooth devoid of potholes – no bumpy roads and so, no backache.

No town busses. So, everyone has a car or two. The drivers are road conscious and polite towards other drivers and stop and give way to pedestrians crossing the road. No harsh driving, no unnecessary road hogging and no rash overtaking; and everyone obeys the road rules. All use the fantastic GPS for guidance and direction.

Spacious non-congested landscape with houses built with light materials, looking bleak and drab outside. Almost all houses look alike with mostly painted – no vivid or vasthu colours that we see in India.

Since it is winter not much of green foliage could be seen.

Though the sun is shining, the outside temperature chills the bone. Here I give the lowest temperatures in degrees Celsius for the past 4 days: 13th: 2, 14th: -3, 15th: -4 and today (16th) it was -7 at 8am (it would have been colder outside while we slept) and now at noon it is -1. Inside the car we need the heater for warmth. Inside the house a steady temperature of 68 to 70 degrees Fahrenheit is maintained throughout day and night. 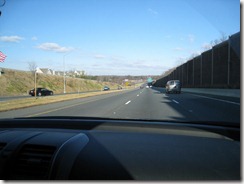 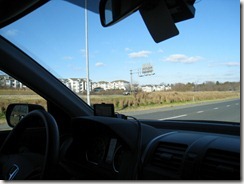 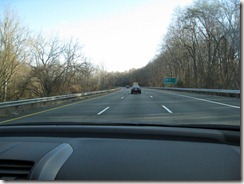 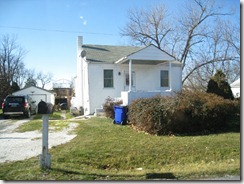 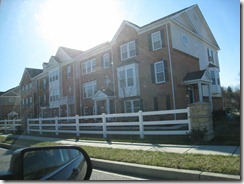 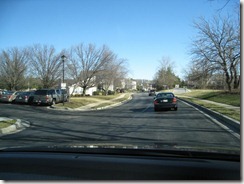 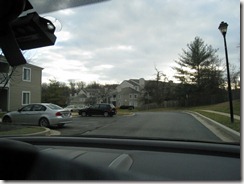 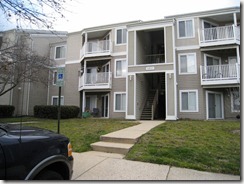