The “Saga of the Greenlanders” (“Grænlendinga saga” in modern Icelandic)  tells that in the summer of 986, Bjarni Herjólfsson, a Norse explorer sailed to Iceland as usual, to visit his parents. Since his father had migrated to Greenland with Erik the Red, Bjarni with his crew set off to find him.

In the 10th century, they had no map or devices such as compasses to guide them. Neither Bjarni nor any of his crew members had been to Greenland before. A storm blew them off course. Bjarni and his crew saw a piece of land covered with trees and mountains. The land looked hospitable. They were not sure whether it was Greenland. Although his crew begged him to, Bjarni refused to stop and explore the new lands. He was much eager to reach Greenland to see his parents.

So, Bjarni Herjólfsson was the first European to have made landfall there and see North America beyond Greenland.

After regaining his course, and arriving in Greenland, Bjarni reported seeing the low-lying hills covered with forests some distance farther to the west. But at the time no one seems to have shown interest. Later, word spread of the lands to the west, which Bjarni Herjólfsson had seen.

As they lacked timber, Greenlanders took a special interest in what Bjarni described. They became allured by the wooded coastline Bjarni had seen. It created a great intrigue throughout the Nordic Empire. Though Bjarni was celebrated by the Greenlanders, King Eric chided him for not exploring that land mass.

Blown off course to the Hebrides and staying there for much of the summer with his crew, Leif arrived in Norway. He became a hirdman of King Olaf Tryggvason. He converted to Christianity from Norse paganism and took on the mission of introducing the new religion to Greenland.

Leif Erikson, having heard the story of Bjarni Herjólfsson, approached Bjarni and purchased the ship he had used for his voyage.

The Saga of Erik the Red says Leif Erikson hired a crew of 35 men. He planned to take his father, Erik the Red along with him in his expedition, however, Erik fell off his horse on the way to the ship, and this was taken as a bad omen and stayed at home. Leif with his crew set out towards the land Bjarni had described. He retraced Bjarni’s route in reverse.

They first went up the West Coast of Greenland and then crossed the Davis Strait and landed first in a rocky and desolate place which he named Helluland (“the land of the flat stones”), possibly Baffin Island.

Then, they went down south and found a forest area which amazed them because there were no trees in Greenland. They named the region Markland (“Wood Land”), possibly Labrador coast.

After two more days at sea, they landed in a luscious place. Relative to Greenland, the weather was mild. Salmon was aplenty in the streams. They named the region Vinland (“land of pastures”).

During one of these explorations, they found the land was full of vines and grapes. Leif and his crew built a small settlement, which later visitors from Greenland called Leifsbúðir (Leif’s Booths).

“In addition, the island discovered by many in one of the seas, which is called Winland, from the fact that the spontaneous growth of grapevines, produced the best wine.”

This etymology retained in the 13th-century Saga of the Greenlanders, provides a circumstantial account of the discovery of Vinland, and named from the vínber, i.e. “wine berry,” a term for grapes or currants (black or red), found there.

Archaeological evidences suggest that Vinland may have been the areas around the Gulf of St. Lawrence, the world’s largest estuary, and the outlet of the North American Great Lakes via the Saint Lawrence River into the Atlantic Ocean.

Leif Erikson formed two groups: one to remain at the camp, and the other to explore the lands.

After having spent the winter in Vinland, Leif Erikson returned to the family estate of Brattahlíð in Greenland in the spring of 1000 with a cargo of grapes and timber.

In Greenland, he started preaching Christianity. His father, Erik Thorvaldsson reacted with anger to the suggestion that he should abandon his religion –  Norse paganism. 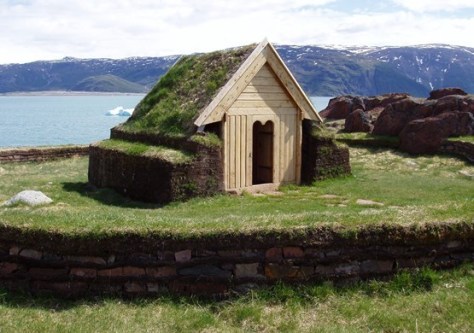 His mother became a Christian and built a church called Thorhild’s Church (actually a small chapel) in Brattahlið.

At odds with both wife and eldest son Leif, Erik attempted a sail to Leif’s Vinland with his youngest son Thorstein. They failed to reach Newfoundland, but the doughty Eric said, “We were more cheerful when we put out of the fjord in the summer; but at least we are still alive, and it might have been worse.”

Erik the Red is last mentioned in the sagas in 1005.

Leif Erickson is last mentioned alive in 1019. By 1025, he installed one of his sons, Thorkell as the chieftain of Eriksfjord (Eiríksfjǫrðr).

None of the sagas mentions Leif Erickson’s death. He must have died in Greenland. Nothing further is known about his family beyond the succession of Thorkell as chieftain.

In the early 1960s, Norwegian explorer Helge Ingstad and his wife, archaeologist Anne Stine Ingstad, identified a Norse settlement located at the northern tip of Newfoundland. They suggested that this site, known as L’Anse aux Meadows, is Leif’s settlement of Leifsbúðir, the first known attempt at founding a settlement by Europeans on the mainland of the Americas.

Leif Erikson had opened the way to America. Vikings ships plied from Greenland to these “new lands” (Newfoundland) during the following years.

According to Brattahlíð lore, Thorvaldur, the brother of Leif Erikson set sail to further explore Vinland. The natives of Vinland, called Skrælings (“stunted”) by the Norse because of their small size, attacked Thorvaldur and his crew. Thorvaldur received a fatal wound and his men buried him in Vinland and returned to Greenland.

According to the “Saga of the Greenlanders,” Leif Erikson’s younger brother Thorstein set sail for Vinland along with his wife Gudrid Thorbjarnardóttir (Guðríður Þorbjarnardóttir) to retrieve his brother Thorvaldur’s body. Losing their way at sea they had to return. At the close of the first week of winter, they landed at Lysufiord, where Thorstein fell ill and died.

After her husband’s death, Gudrid returned to Brattahlíð. She married a merchant named Thorfinn Karlsefni, “a man of good family and good means” and “a merchant of good repute.” After their marriage, at Gudrid’s insistence, the couple set sail to Vinland with a group of sixty men, five women, and various livestock in an attempt to settle down in the camp that Leif Erickson had built some years earlier. They spent three years in Vinland.

In Vínland, Gudrid bore a son, the first European reported to be born in the Western Hemisphere. They named him Snorri Thorfinnsson,

Harassed by the natives, Thorfinn and Gudrid returned with their son to Greenland, where Thorfinn Karlsefni died.

After that, the hostile indigenous people of Vinland thwarted the many attempts by settlers from Greenland and Iceland to found a colony there. The stories of the various Viking expeditions survived in the collective memory of the descendants of those who returned by the 13th century from the North American coast to settle once again in Greenland and Iceland.

Leif Erikson has the honor of being the first European to open the way to America almost 500 years before Christopher Columbus.