The penitentiary of Punta Carretas, just two and a half miles from the city center in a barrio of Montevideo, was started as a women’s prison, circa 1896. In 1901, it was decided to make it a penitentiary for men as well.

In 1970, when Uruguay had the highest per capita rate of political incarceration anywhere in the world, the Government counter-guerrilla operations gradually arrested several members of the MLN-T and incarcerated them in the Punta Carretas maximum security prison.

On March 23, 1970, a police officer recognized José Mujica at a bar in the center of Montevideo while meeting one of his contacts. The policeman called for backup. Seeing a police car pulling up to the entrance of the bar, Mujica pulled out his gun and opened fire. During the ensuing shootout Mujica shot two policemen, and he himself was hit twice. While lying sprawled on the floor, one policeman shot him four more times.

In the shootout in the bar “La Vía”… two were wounded. An anti-social, gravely, and a police officer. Following a denunciation four members of the group of “criminals” were apprehended.

Later, on the same page we find:

It turned out the seriously wounded was “criminal” José Alberto Mujica Cordano, known as ” Pepe “. His documents were in the name of José Antonio Mones Morelli.

Luckily, the doctor who treated Mujica was also a Tupamaro, hiding in plain sight. After a year, José Mujica recovered from the bullet wounds,. He was once again apprehended and incarcerated along with the other captured Tupamaros in the Punta Carretas prison.

On July 30, 1971,  thirty-eight women Tupamaros escaped from the Punta Carretas maximum security prison through the tunnel dug from the outside, connecting their cell floor with the city sewer system.

In Uruguay, everybody knows about “The Great Escape,” or “The Escape from Punta Carretas,” or “El Abuso” the code name the Tupamaros used for it. For a certain generation of Uruguayans, it is a word that has passed into national lore. In Spanish, the term “abuso“ means “abuse” or “mockery” or “outrage.”

The huge penitentiary complex had 400 cells. The Tupamaro guerrillas were held in 95 cells.

In addition to the guards inside, there were platoons of 60 to 80 soldiers guarding the outer walls.

From the day the first compañero was arrested, the Tupamaro guerrillas planned to escape from the maximum security prison. First, they ruminated on taking over the prison. Since the prison complex was colossal, there was no way to commandeer it by surprise without a bloody scuffle. The Tupamaros always tried to avoid violence at all costs and some compañeros were averse to killing. So, they concentrated their efforts to escape by other means.

Conditions in Punta Carretas were more relaxed than in other prisons. Since most Tupamaro guerrillas were educated and  extremely organized, they quickly established themselves within the prison walls and exercised pressure on the corrupt prison guards and the warden. Thus, the prisoners were allowed to receive food from their families and sympathizers from the outside, which they would cook inside their cells using kerosene stoves. They shared their food, even with non-Tupamaros. In addition to food, family members also brought books and magazines.

Regular soldiers patrolled the outer wall. The guards inside the prison were contracted non-military men with families to feed and had chosen the profession for its excellent pay and job security.

The guards allowed the Tupamaro prisoners to bet on horse races and purchase lottery tickets. For the right price, they would bring in newspapers or alcohol. The prisoners were provided classes in woodwork and other crafts and were allowed to play soccer daily games the field behind the cellblock.

In the early months of 1971, the Tupamaro male prisoners lodged in the Punta Carretas maximum security prison started digging a tunnel to escape from the state prison. They called it Mangangá, but their effort was thwarted by heavy rain.

On August 5, 1971, the Tupamaro prisoners again started digging patiently another tunnel, planned down to the smallest detail, which they secretly called the operation El Abuso (The Abuse).

Outside the prison walls, most of the active Tupamaros knew nothing about operation El Abuso.

Some Tupamaros were given the task of stealing prison plans and to pass them on to the inmates. The plans were cut into small pieces and stuffed inside small nylon capsules. The passing of the capsules was accomplished by the male Tupamaros while they kissed the female Tupamara prisoners during visits. At times, the recipient female Tupamaras swallowed the capsules to avoid detection, and retrieved the bits of plans from their faeces. The plan bits were reassembled inside the prison.

The walls of the cells in Punta Carretas were a foot-and-a-half thick and made of field brick. The prisoners scraped away the mortar between the bricks in their cell walls using metal wires and shims collected from their woodwork classes.

The prisoners originally intended to make holes in the walls to hide censored magazines and newspapers. Then, they realized that if they could perforate a small hole through to the next cell, then men on both sides could hold the ends of a wire, pull it back and forth, and remove the mortar between a group of several bricks. Thus, they managed to remove sections of walls about 60 inches wide by 40 inches high. The openings helped them move from one cell to cell to the next.

They disposed the mortar dust in their toilets, or spread them on the football field. They covered the evidence of their work by stuffing paper in the crevices between the bricks, plastering and painting the surface. They got the plaster from their families in bags marked “flour”. At times they covered glaring spots on the walls with posters.

Their activity was not discovered because the Tupamaros convinced the warden to stop making surprise cell inspections, claiming the inspections made them anxious and uneasy.

The Tupamaros were on the second and third floors of the four-storey prison. Through negotiations and pretensions, they managed to get cell transfers for all the compañeros who would participate in the escape. By early September, all the escapees were on one side of the hallway, while the other side was filled with men with light sentences who would be released soon.

They succeeded in connecting together some fifty cells on three floors.

At the same time, they negotiated with the five common prisoners lodged in the ground-floor corner cell #73 to use their cell to dig the escape tunnel.

The Tupamaro prisoners who were not claustrophobic dug a tunnel about 100 feet (30 meters) long, from cell 73 to the house #2535 across the Solano García street, which had been taken over by the Tupamaros.

Digging eight hours a day it took about 30 days to complete. The whole operation was carried out in secret and as such some Tupamaro inmates came to know about the tunnel and the planned escape only on the day before the escape, when all preparation was already in place. 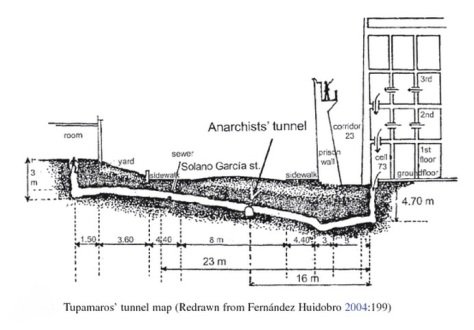 During the night on the eve of the escape, many Tupamaros participated in disturbing the peace in Cerro and La Teja, a barrio of Montevideo to draw the police force away from the surroundings of Punta Carretas. Several buses and vehicles were torched in those neighborhoods and the tires of dozens of police cars were slashed to immobilize them. However, most of the Tupamaro guerrillas who took part in these clashes had no idea for what purpose they did so.

In the early morning hours of Monday, September 6, 1971, Raúl Sendic, and 105 Tupamaro guerrillas, including five common prisoners, who joined forces in the digging, crawled through the burrow. They emerged through a two-by-two foot square opening in the floor of the living room of the house on the other side of the Solano García street, where an 85-years-old Serrana Auliso, an English teacher, now lives.

The compañeros who were waiting for them in that house, gave each of them a pouch of money and a gun. They escapees exited through the backyard of the house, and were whisked away from the area in two buses, trucks and a few taxis while other compañeros created diversions by burning cars across the town.

Most of the escaped guerrillas were arrested during the next twelve years of military rule.

Among those political prisoners who escaped Punta Carretas Prison on that day were José Mujica, and Eleuterio Fernandez Huidobro, who bore the nickname “Nato” (“Flatnose”). These two Tupamaros were later elected to the senate in 1999 after a term in the House of Representatives and are now the president and Defense Minister of Uruguay respectively.

The “great escape” or “El Abuso” has been recorded in the Guinness Book of World Records in the “Greatest jail breaks” category as follows:

“In September 1971 Raúl Sendic and 105 other Tupamaro guerrillas plus five nonpolitical prsioners, escaped from a Uruguyan prison through a tunnel 298 ft long.”

The political consequences of the prison break were enormous. On September 9, 1971, President Jorge Pacheco-Areco instructed the armed forces to conduct anti-guerrilla operations against the MLN-T through Decree No. 566/971. The Uruguayan Congress suspended habeas corpus, (a writ or court order that requires a person under arrest to be brought before a judge or into court.