From the day the Malaysia Airlines Flight MH370 disappeared many theories such as hijacking, disintegration in midair, missile attack, and so on, are being elucidated by pundits and amateurs for the possible disappearance of the flight that took off on Saturday, March 8, 2014, at 00:41 MST from the Kuala Lumpur International Airport with 239 people, including 12 crew members.

The location of Malaysia Airlines Flight MH370 last seen on Air Traffic Control (ATC) radar at 02:40 MST (March 7, 18:40 UTC) was at 6°55′15″N 103°34′43″E. After that the aircraft ceased all communications. The aircraft’s transponder in the cockpit was switched off just before the plane passed from Malaysian to the Ho Chi Minh Area air traffic control space – the optimum moment, when the aircraft was not controlled by air traffic controllers in Malaysia or Vietnam. Later, authorities in Thailand and China informed their Malaysian counterparts that the aircraft had not entered their airspace.

“Based on new satellite information, we can say with a high degree of certainty that the Aircraft Communications Addressing and Reporting System (ACARS) was disabled just before the aircraft reached the east coast of Peninsular Malaysia. Shortly afterwards, near the border between Malaysian and Vietnamese air traffic control, the aircraft’s transponder was switched off.”

“Despite media reports that the plane was hijacked, I wish to be very clear: we are still investigating all possibilities as to what caused MH370 to deviate from its original flight path.”

Chris Goodfellow, a Canadian with 20 years experience as a Class-1 instrumented-rated pilot for multi-engine does not speculate on terrorism, hijack, meteors, etc. He tries to look for a more simple explanation of this incident through his post “MH370  A different point of view. Pulau Langkawi 13,000 runway” on Google+.

When he heard reports that Malaysian military radar tracked the aircraft on a southwesterly course back across the Malay Peninsula into the straits of Malacca, he instantly brought up Google Earth and searched for airports in proximity to the track towards southwest.

Goodfellow suggests that the chief pilot was confronted by some major event on-board that made him turn back right away to the closest safe airport. It was probably a serious event and the crew in the cockpit must have been occupied trying to fight the fire and controlling the aircraft. For Goodfellw, the loss of transponders and communication makes perfect sense in the case of a fire and electrical short-circuit caused by the fire because the first reaction is to pull all the main busses and restore circuits, one by one, until the bad one is isolated and the aircraft would have gone silent. Aviate, Navigate and lastly communicate would be the modus operandi of a seasoned pilot. 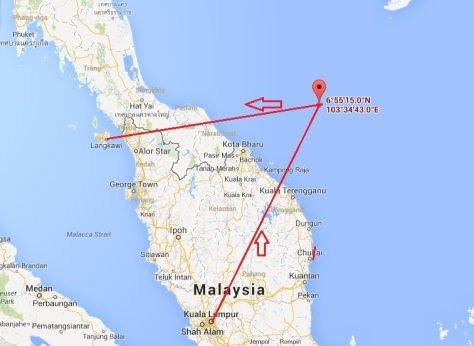 The left turn is the key here. This was a very experienced senior Captain with 18,000 hours. Maybe some of the younger pilots interviewed on CNN didn’t pick up on this left turn. We old pilots were always drilled to always know the closest airport of safe harbor while in cruise. Airports behind us, airports abeam us and airports ahead of us. Always in our head. Always. Because if something happens you don’t want to be thinking what are you going to do – you already know what you are going to do. Instinctively when I saw that left turn with a direct heading I knew he was heading for an airport. Actually he was taking a direct route to Palau Langkawi a 13,000 foot strip with an approach over water at night with no obstacles. He did not turn back to Kuala Lampur because he knew he had 8,000 foot ridges to cross. He knew the terrain was friendlier towards Langkawi and also a shorter distance.

What I think happened is that they were overcome by smoke and the plane just continued on the heading probably on George (autopilot) until either fuel exhaustion or fire destroyed the control surfaces and it crashed. I said four days ago you will find it along that route – looking elsewhere was pointless.

This pilot, as I say, was a hero struggling with an impossible situation trying to get that plane to Langkawi. No doubt in my mind. That’s the reason for the turn and direct route. A hijack would not have made that deliberate left turn with a direct heading for Langkawi. It would probably have weaved around a bit until the hijackers decided on where they were taking it.

Surprisingly none of the reporters , officials, other pilots interviewed have looked at this from the pilot’s viewpoint. If something went wrong where would he go? Thanks to Google earth I spotted Langkawi in about 30 seconds, zoomed in and saw how long the runway was and I just instinctively knew this pilot knew this airport. He had probably flown there many times. I guess we will eventually find out when you help me spread this theory on the net and some reporters finally take a look on Google earth and put 2 and 2 together.

The Langkawi International Airport is one of seven international airports in Malaysia and connects the island to Kuala Lumpur, Singapore, Penang and Subang.