Why am I interested in wetlands? Because I am concerned. My home in Jalladianpet is just 2.5 miles (4 km) from the Pallikaranai wetland in Chennai, Tamilnadu, India.

Four decades ago, this pristine idyllic wetland had a water spread of approximately 5,500 hectares estimated on the basis of the Survey of India toposheets (1972) and CORONA aerial photographs (1965). It serves as nature’s primary aquifer recharge system for Chennai city. It harvests rain water and the flood water during monsoons and thereby mitigates the desolation and suffering that floods could cause in low-lying areas in Chennai.

Lamentably, over the years, the Chennai Metropolitan authorities without giving any thought to the future recklessly chose to dump over one-third of the garbage, almost 2,600 tonnes per day, of the ever-growing metropolis here in this climactic wetland.

At present the water spread has shrunk to one-tenth its size due to indiscriminate dumping of city refuse; discharging of sewage; disgorging toxic waste products, etc.

Many nature lovers have photographed the current palpable and saddening state of the Pallikaranai wetland. On June 8, 2013, The Hindu published the article The mired marshby Shaju John. This article was augmented by photographs  captured by him in the post Photo file: The mired marsh.

Thousands of tonnes of trash of all sorts containing non-biodegradable waste find their way to the wetland amidst the dumped refuse.

While traveling along the roads around the Velachery wetland one encounters the unbearable stench emanating from the decaying garbage hillock. Despite the widespread clamour to stop burning rubbish in the dump yard that stifles the air and impairs visibility of commuters, the incessant burning goes on.

The incredible rate of development, such as the rampant construction of sanctioned IT parks, the National Institute of Ocean Technology (NIOT) campus, Hospitals, Colleges, high-rise office and residential buildings, the Velachery MRTS railway station, the flyovers, the road connecting old Mahabhalipuram Road (OMR) and Pallavaram, etc., in the midst of the marshland also have immensely contributed to the shrinking of the water spread. 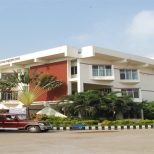 With policies in place to crackdown on poaching, encroachment and illegal waste disposal, there is yet hope for the Pallikaranai wetland.

In 2007, to protect the remaining wetland from shrinking further, 317 hectares of the marsh were declared by notification as a reserve forest by the State of Tamilnadu.

Nevertheless, it is the opinion of the scientists and researchers involved in the study of the wetland that an additional 150 hectares of undeveloped region located on both sides of the road connecting old Mahabhalipuram Road (OMR) and Pallavaram that bisects the marsh should also be declared a forest reserve.

However, even now, dumping of garbage by the Chennai metropolitan authorities goes on unabated.