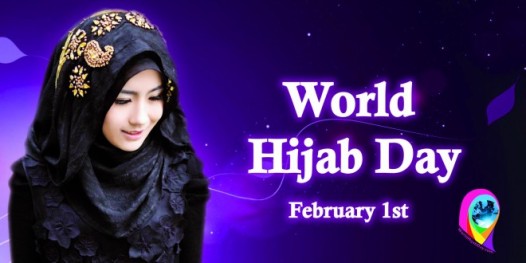 More than 50 countries of the world celebrated “World Hijab Day” on February 1, 2013.

A New Yorker Nazma Khan born in Bangladesh founded the World Hijab Day. It was organized almost solely over social networking sites. Muslims and non-Muslims in more than 50 countries across the world have been attracted by it.

Nazma Khan came to the United States from Bangladesh at the age of 11. She was the only person in her Bronx school to wear the Hijab, the traditional Islamic veil or scarf that is worn by many post-pubescent Muslim women to cover the head and chest.

Her classmates and schoolmates ridiculed her for wearing the Hijab and called her names. They tormented her throughout her time in the middle school and high school for wearing the Hijab. She suffered many hardships when she entered City College of New York, especially after the four coordinated terrorist attacks by the Islamic terrorist group al-Qaeda in New York City and the Washington, D.C. Metropolitan area on Tuesday, September 11, 2001. At that time, some New Yorkers wary of Muslims made her a target for ridicule and suspicion.

Nazma said: “I was made to feel like a criminal, as if I was responsible for 9/11 and owed an apology to everyone.”

However, Nazma, true to her religious beliefs, steadfastly wore the Hijab, shrugging off the rancorous comments and venomous stares.

She launched the website worldhijabday.com on January 21, 2013 with the mission to make non-Muslims understand the virtues of wearing the Hijab, the traditional Islamic headscarf.

Through her website, Nazma Khan has gained many Muslim and non-Muslim friends. Many of her Muslim followers are immigrants themselves, and have all experienced similar pains like her. Nazma has inspired many Muslim students to wear the Hijab.

In a message, she appealed to women across the world to wear the Hijab for just one day on February 1, 2013, to support the personal freedom to wear clothing of one’s own choice.

I have listed and described the names of some common clothing worn by the Muslim women – from the least to the most conservative such as the Hijab, Khimar, Shayla, Abaya, Chador, Niqab, Yashmak, and Burqa, in my post titled, “A Muslim Woman’s Veil.”

Even though there is no basis for celebrating World Hijab Day, Muslims in more than 50 countries of the world celebrated the day on February 1, 2013. However, there are detractors too among Muslims who are against celebrating the so-called World Hijab Day. Umm Ibrahim (https://www.facebook.com/umm.ibrahim.56) living in Abu Dhabi, United Arab Emirates, vehemently says:

✦ Please know there is no BASIS for Hijab Day, Mother’s Day, etc etc. Neither the Prophet (sallallahu ‘alayhi wasallam) nor his sahabah and none from the pious predecessors ever celebrated such stuff! Our scholars have warned us clearly against innovated festivals/occasions. Muslims should avoid initiating or encouraging innovated occasions in imitation to those of the kuffar, such as Mothers’s Day, the day of the Earth, etc!

✦ DAWAH starts with TAWHEED not HIJAB! Hadith of Mu’adh, when Allah’s Messenger (sallallahu ‘alayhi wasallam) sent him to Yemen, he said, “O Mu’adh, you aer going to a nation from the People of the Book, so let the first thing to which you will invite them, be the TAWHEED OF ALLAH.” (Saheeh Bukhari (book 93, no 469)

✦ This is making fun of Hijab by asking support of non-muslims to wear for a day! Allah alone is sufficient for us. More reward for sisters who are struggling more to continue their hijab in west! IF possible, migrate from their lands which ban/mock Islam. Otherwise, just stay firm and be sincere and ask Allah to help. We know many sisters who wear Niqab in the West, Alhamdulillah! So, in future do we expect World NIQAB DAY, too?

✦ Prophet (sallallahu ‘alayhi wasallam), who said: “I urge you to adhere to my way (Sunnah) and the way of the rightly-guided successors (al-khulafa’ al-raashidoon) who come after me. Hold fast to it and bite onto it with your eyeteeth [i.e., cling firmly to it], and beware of newly-invented matters.”