26 years ago, on April 26, 1986, a catastrophic nuclear accident occurred at the Chernobyl Nuclear Power Plant situated about 130 km north of Kiev, Ukraine, and about 20 km south of the border with Belarus. The explosion and fire released large quantities of radioactive particles into the atmosphere that spread over much of Western USSR and Europe, contaminating large areas of Belarus, Ukraine, Russia and beyond in varying degrees.

The Chernobyl Disaster, the worst nuclear power plant accident in history, is the first of the only two classified level 7 events on the International Nuclear Event Scale; the other being the Fukushima Daiichi nuclear disaster in 2011.

The Soviet Union claimed that the Chernobyl Disaster, was a unique event and the only accident in the history of commercial nuclear power, where radiation-related fatalities occurred. They said the design of the reactor being unique the accident is thus of little relevance to the rest of the nuclear industry outside the Eastern Bloc.

The Chernobyl Power Plant Complex consisted of four nuclear reactors of the RBMK-1000 design with units 1 and 2 constructed between 1970 and 1977, while Units 3 and 4 of the same design completed in 1983. Two more RBMK reactors were under construction at the site at the time of the accident.

To contain the contamination and avert a greater catastrophe, the Soviet Union employed over 500,000 workers and spent an estimated 18 billion rubles. 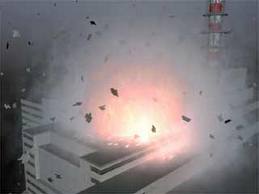 According to the Soviets, the accident destroyed the Chernobyl unit 4 reactor, killing one person immediately while a second person died in hospital soon after due to injuries. A third person died from a coronary thrombosis. Out of the 237 people on-site originally diagnosed for acute radiation syndrome (ARS) during the clean-up, 134 cases were confirmed. Of these, 28 people died as a result of ARS within a few weeks of the accident. Subsequently 19 more died between 1987 and 2004, however, their deaths cannot necessarily be attributed to radiation exposure. Nobody off-site suffered from acute radiation effects although a large proportion of childhood thyroid cancers diagnosed since the accident is likely to be due to intake of radioactive iodine fallout.

The official Soviet casualty count of deaths is under dispute. Long-term effects such as deformities and cancers are still being accounted for.

By October 1986, the Soviets enclosed Chernobyl unit 4 in a large concrete shelter to allow continuing operation of the other reactors at the complex. However, that concrete  structure is neither strong nor durable. Around 200 tonnes of highly radioactive material remains deep within it, and this poses an environmental hazard until it is better contained.