French President Francois Hollande is making his first visit out of Europe since he was elected. And he has chosen India as a preferred destination for his visit starting 14th February.

On his radar is to sell Areva’s failed EPR (European Pressurized Reactor) nuclear reactors to India. Even as his own country has neither been able to implement the EPR reactors in France or Finland and nor has the US regulator certified it, the Indian government is eager to set up these reactors in a huge area in coastal Maharashtra – at Jaitapur – a highly bio-diverse region that needs preservation.

The carrot which the French president is dangling is the supply of fighter jets to India on “favorable” terms. The Indian government for want of more and more weapons (and probably with an eye on making some money out of the deal?) is turning a blind eye to the enormous damage this project will cause. Anuj Wankhede and Cressida Morley write about the Jaitapur protestors, who despite all efforts of the French and Indian governments, remain determined that this project will never see the light of day.

The beauty of the Ratnagiri coastline and surrounding area has to be seen to be believed. Any government official from DAE to NPCIL would be crazy to think of destroying or even putting at risk this kind of natural biodiversity. It is already established that Maharashtra state itself does not require any more electricity than is already being produced and the Chief Minister himself is on record as saying that the state will be free of any load shedding by the year end.

So for whom is the Jaitapur Nuclear Power Plant (JNPP) being built?

Certainly not for the local people, the fishers, farmers and ordinary people whose livelihoods will be destroyed and their lives threatened. The government tells us that nuclear power is needed for ‘development,’ but the people who will be directly affected by JNPP have a very different ideas of what development is and whom it should benefit.

The fishing village of Sakhri-nate, is just a few kilometers by road from the proposed JNPP site – only 3 kilometers as the crow flies. You can see the site clearly just across the sea.

Slogans such as ‘No nuclear’ and ‘Areva go back’ are painted on walls all around the village and the people against JNPP vehemently say they are prepared to give their lives rather than allow the plant to come up. Recent newspaper reports have shown just how desperate NPCIL is to do a deal with the fishers by raising the compensation for land acquisition to Rs. 22.5 lakh per hectare from Rs.1.5 to 4 lakh announced previously.

But the fishers are adamant…it doesn’t matter how much they are paid when their livelihoods, their community, in fact their very lives are on the line.

Most of those opposed to the plant in Sakhri-nate are fishers but there are people of different professions as well, showing that it is not just a direct concern for livelihood but a much wider fear that JNPP will in fact destroy their lives and community. The activists have detailed knowledge of how the JNPP will affect their lives. For fishers, this knowledge may not be scientific in the academic sense of the word, but every day they observe the sea intimately as their lives literally depend on it. The knowledge that they have gained through long experience cannot be easily dismissed.

The fishing community is concerned that the effluent water used for cooling the nuclear plant – which will be pumped back into the sea at a temperature – at least 5-7 degrees Celsius higher than the natural temperature – will have a disastrous effect on the fish population and their breeding. The Government is trying to assure the fishers that a rise in seawater temperature would not affect the fish, except possibly to make them bigger! Obviously, the fishers are not buying this at all. They claim that the fish that presently inhabit their fishing ground will not be able to live in such a changed environment. Even if these fish are able to swim away to other areas of the sea, shellfish, for example cannot escape so easily and will surely perish. Perhaps, different species of fish will come to the area due to the raised temperatures but this also represents an unknown for the fishers. In any case, they refuse to believe that the environment will simply remain the same with such enormous quantities of heated water being pumped into the sea. As one fisher put it, even a refrigerator emits heat which can affect the surrounding air temperature and living things, so how can the government claim that an entire nuclear power plant will have no impact on the environment?

Others have expressed fears of terrorism and natural disasters.

The cliffs surrounding Sakhri-nate, directly opposite the proposed site for JNPP, are spectacular to say the least. The solid rocks here weather the eternal beating of the sea waves. Yet, this rock was split wide apart by lightening and electrical storms that are common in the area. It’s easy to imagine similar lightening bolts falling just a few kilometers away, and the damage they would do to a nuclear reactor. It would be a disaster of unimaginable proportions indeed. 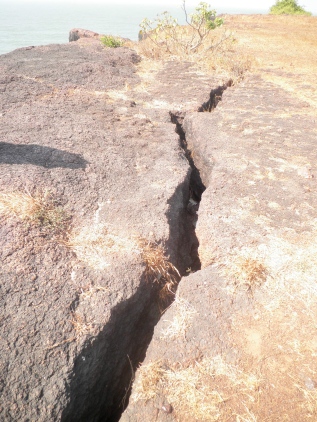 Especially after Fukushima, the fear of accidents is very real and no amount of government assurances has convinced the activists that JNPP will be totally safe. The level of distrust towards the government is very high and palpable. Activists claim that the government contradicts its own reports and does not disclose ‘inconvenient’ information besides they feel the government is least concerned about the locals.

Rather than the government, Sakhri-nate fishers would rather believe their fellow fishers from another part of the state – Tarapur. They have travelled to nearby Tarapur which as the site for the first nuclear reactor to be built in India and they have seen what the nuclear power plants have done to the fishing catch. The fishing community at Tarapur is practically out of business due to the low catch and the enforced security ring around the plant which forces them to take long detours into the sea and which entails huge costs on diesel – not to mention the time spent.

At Tarapur, the locals were told 40 years ago that the Tarapur NPP was a matter of national pride. The local community and fishermen in that area gladly agreed to its construction, fully believing government assurances that the fish and environment would not be affected and that they would be adequately compensated. They have since been thoroughly betrayed and have warned their fellow fishers near Jaitapur to fight against JNPP – lest the same fate befalls them. The information received by the Sakhri-nate fishers from the Tarapur fishers is based on their bitter experiences and a shared understanding of the sea and the environment, both of which are integral parts of their lives and livelihoods. Who would you rather believe—the actual experience of your peers or the theoretical science of distrusted governments?

The rift between the local community, dead-set against the NPP and the government, equally determined to build it, is not just about differing information and mistrust. There is a more fundamental difference in worldview between these two parties. While the government’s idea of ‘development’ focuses on achieving ambitious electricity generation, attracting foreign capital and making more and more ‘goods’ for an ever-expanding market, the fishers of Sakhri-nate have different ideas. 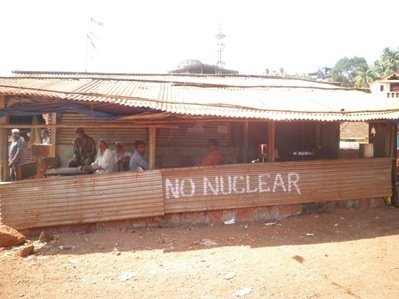 As one local explained “We are already developed. We don’t need anything more; we have full employment in the village. Even disabled or illiterate people have jobs, mending fishing nets etc. We have enough electricity; all we ask is that the government allows us to pursue our livelihoods. We have enough money to live well now, as fishing is a lucrative industry, but if we loose our livelihood, we will have nothing.”

Others said that if development was needed at all in their village, it should be in the form of increased educational facilities – including vocational schools – so that their children would get better employment opportunities – if they choose to. There are also calls for growth which minimizes environmental destruction and which compliments local industries such as food processing factories for the fish and mangoes, also produced in large quantities in the Jaitapur area. The already present ice factories, which provide ice to pack the fish so they can be sent to different parts of the country, are another obvious example of this type of development.

It would seem that the government has underestimated the level and type of knowledge and information that the local community has or even tried to understand their concerns – leave alone address them. This is not to mention the high income and living standards enjoyed by the fishermen who do not want this so called lop sided “development” at such high risks.

But most of all, the official model of development is being called into question: Why should large-scale industrial projects be encouraged, in this case a foreign-funded project that carries a risk of unimaginable destruction, and why should local communities be required to sacrifice their lives and livelihoods for lighting up city malls while the locals who are being affected by the project will still have only erratic power supply – just as is the case at Tarapur? 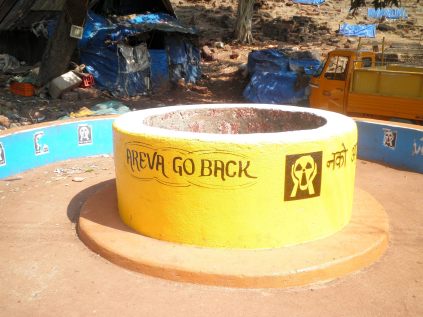 (The views expressed in the article are the personal views of the authors and not those of any organization or institution.)