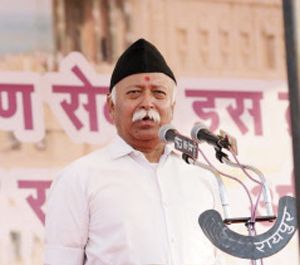 He created an uproar by his remarks while speaking on issues concerning women saying, “Such crimes (rapes) hardly take place in Bharat (rural areas), but they occur frequently in India (urban areas)”.

According to IBN, the RSS chief said, “There is a theory of social contract in the universe. A husband and a wife are bound by a contract which says – you (woman) look after the household chores and satisfy me, I (man) will take care of your needs and will protect you. Until she delivers her duties without fail, he keeps her on the contract, and if she fails to honour the contract, he disowns her. And if it is the husband who is not honouring the contract, she can also abandon him. One can go for a new contract then.”

Bhagawat also blamed the western culture and the excessive urbanization for rising crimes against women.

Activists raised their voice against the RSS chief’s attempt to draw a correlation between the modern way of living and rape. Women’s groups criticized his view on rape in “India” and “Bharat” for being regressive. However, statistics show that Bhagwat’s views are wrong.

The National Crime Records Bureau of India does not split registered cases of sexual assault by rural and urban areas. However, Mrinal Satish, an associate professor of law at Delhi’s National Law University researching for his doctoral dissertation at the Yale Law School in the US found that 75% of rape cases that led to convictions over the last 25 years originated from rural India. Satish scoured all high court and Supreme Court cases involving rape reported in the Criminal Law Journal between 1983 and 2009 in which at least one court (trial court, HC or SC) had convicted the accused. 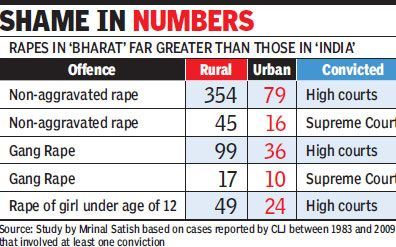