Traditionally, Muslim women dress modestly. A friend of mine from Tirunelveli, Tamilnadu, India teaches in a school, in the Maldive Islands. Though a Christian by faith, she wears clothes like her Muslim colleagues. Today I saw a lovely photograph of her in Islamic attire sans the veil. This made me wonder what terms I should use for a Muslim woman’s veil.

I found that the name given to the veil depends on the shape of the veil, the style, colours, the country and the region where the wearer lives, how much of the head the veil covers, and whether the veil integrates with her main clothes.

I have listed and described the names of some common clothing worn by the Muslim women – from the least to the most conservative such as the Hijab, Khimar, Shayla, Abaya, Chador, Niqab, Yashmak, and Burqa.

The term Hijaab usually describes a Muslim woman’s modest dress – the least conservative form of a woman’s veil. A headscarf secured around the head, covering the neck, ears, hair, the entire head except the face, and fastened under the chin. It usually reaches down to the shoulders.

The word Hijaab derived from the Arabic word for curtain or cover, and according to Islamic scholarship, has a wider meaning of modesty and privacy. 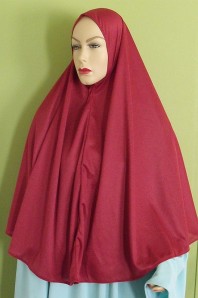 A long piece of cloth that drapes over the entire top half of a woman’s body, from the head all the way down to the elbows, hands, knees or feet depending on the chosen length.

A small or short Hijab that covers the head and neck. Some women prefer to wear the Shayla as everyday casual wear.

In contrast to the Hijaab, the Abaya worn over other clothing extends to the rest of the figure. To put it simply, an Abaya is a Hijaab-dress combo.

The Abaya usually made of black synthetic fiber, sometimes decorated with colored embroidery or sequins may be worn from the top of the head to the ground (like the Chador described below), or over the shoulders and may be combined with a headscarf or face veil.

An enveloping cloak worn by women, covering the wearer from the top of the head to the heel. Iranian women wear the Chador without a face veil.

A piece of fabric that covers the face, nearly every part under the eyes. Most often the Niqab proceeds all the way up to the hair line. The Niqabworn almost exclusively with Hijaabs and Abayas, provides a slit for the woman’s eyes; however, her face stays concealed.

A piece of cloth that combines the lower half of a Niqab, namely, the part below the eyes, with a partial Hijaab so as to cover most of the hair. Hijaab and Hijaab-Niqab wearing has come into vogue overtaking Ysahmak that was once popular in Egypt. 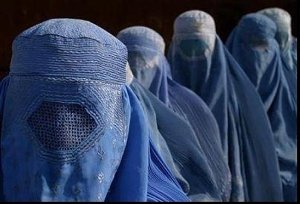 The most conservative garment, modeled on the Abaya. However, instead of leaving the face exposed, the Burqa covers the entire face. A mesh replaces the upper part of the face so that the woman can see the world around her. The Burqa conceals the woman completely, isolating her from the surrounding humanity.

7 thoughts on “A Muslim Woman’s Veil”