Not only species of animals are vanishing from the face of our earth, forms of folk art too. Today, in most regions of this world, many forms of folk art are no more a part of the ethnic tradition of the people.  The present generation is not even aware that those forms of folk art did exist. One such ethnic folk art indigenous to India is the Street Play. It is now virtually a dying art. It is dying because of the popularity of cinema. It is dying for want of patronage.

In Tamilnadu, we call this folk art “Theru Koothu” (Tamil: தெருக்கூத்து). It is a folk theatre performed in the open mostly during temple festivals in the villages of Tamilnadu.

The art of Theru Koothu is handed down from one generation to the next. The performers hail from poor down trodden families of the lower level of society. They know no other trade. They travel as a troupe that include the actors, dancers, musicians, make-up artists, stage-decorators, cooks and sometimes a few family members. They are always on the move travelling from one village to another.

In earlier times these artists were held in high esteem for their artistry and talent. They entertained the village folk on invitation by the village elders. But today they are a forgotten lot and perform during temple festivals in villages of their own accord and live on handouts. 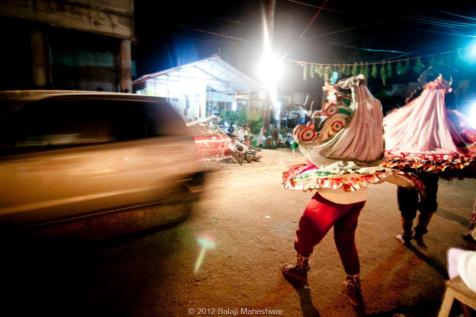 The Koothu (Tamil: கூத்து) or performance is held in an area about 16 feet long and 14 feet wide called ‘sabai’ (Tamil: சபை) meaning assembly or court.

In those good old days when there was no technology such as microphones and loudspeakers, the artists trained to sing at a high pitch to reach the entire crowd. There were not much dialogues and the artists enacted whole plays via singing with the accompanying musicians seated in the background on stage. Now, most of the Theru Koothu troupes have their own sound equipment or rent them for their performances; even then, the actors still sing spilling their guts out.

The dress of the artists are a complex lot – wide colorful skirts, sparkling shoulder plates and elaborate wide head-dress, and of course thick bright heavy makeup.

All actors are males – even female characters are performed by males except in few instances.

They enacted mostly mythological stories already familiar to the villagers.. The themes are usually drawn from Mahabharata. Some popular items on the Theru Koothu repertoires include Harichandiran (Story of King Harischandra who never told an untruth), Draupathy Vastraparanam (Disrobing of Draupathy, the wife of the Pandavas), Karna Motcham (Defeat of Karna, the half-brother of Pandavas), Praghalada Charithram (Story of Praghalda), Bagiratha Prayathanam (Bagiratha’s efforts to bring River Ganges to Earth), etc. 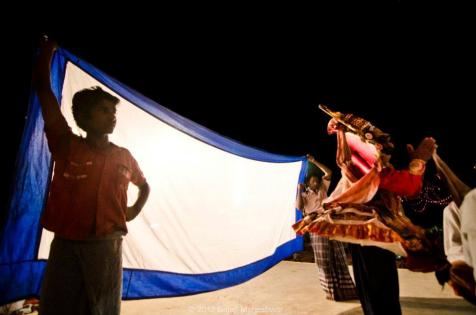 Koothu is performed mostly late in the evenings, after 8 pm. There are no entrance fees.  No chairs provided for the audience except for the dignitaries, if there be any present at the venue. The public are at liberty to stand, sit, recline or choose whatever stance or manner in which they wish to see the play.

All the photographs I have used to augment this article were taken by my friend Balaji Maheshwar, a talented photographer. Below are some photographs of the artists and the members of a troupe caught by Balaji in their relaxed moments …