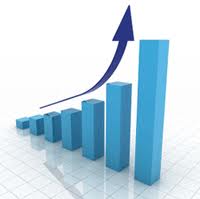 A few days ago, during a discussion, a friend of mine told us that the damage caused by a nuclear catastrophe would be exponential. What does the term ‘exponential’ mean? How could we show the rapidity of exponential growth?  Usual growth is just a few percentage points but here is a demonstration of how rapidly exponential growth would be.

For this experiment, take a sheet of ordinary  letter size paper (A4). A sheet of paper weighing 80 gm/sq.m is about 0.1 mm thick.

Fold this paper into half. Fold it a second time, and a third time. The paper will now be  as thick as our finger nail.

At the 7th fold it will be as thick as a notebook and it would be barely possible to fold further.

If we were to fold the paper 10 times, it would be as thick as the width of our hand.

Unfortunately, it would not be possible to fold more than 12 times.

Hypothetically, if it was possible to fold further …

At seventeen folds it would be taller than an average house.

Three more folds and that sheet of paper is a quarter height of the Sears Tower (a skyscraper renamed as Willis Tower in 2009 is 1,729 feet from Franklin Street Entrance,  in Chicago, Illinois).

Ten more folds will make it cross the outer atmosphere.

Add another twenty folds to reach the sun.

At the sixtieth fold it would have the diameter of our solar system.

At 100 folds it would have reached the radius of our universe.

If you do not have a good scientific calculator, then here is a table that shows the rapidity of growth on an exponential scale. In this table that I have used the caret symbol to represent the exponentiation operator. This table

I came across the following video clip while surfing the internet. Click on this link: Paper folding to the Moon.The exponential growth also works inversely for the width of the paper. Each time the paper is folded, its width is halved. If we begin folding with a large piece of newspaper let’s say 50 cm wide, after 10 folds, the paper would be 0.05cm wide. After 20 folds, it would be 0.000048 cm wide. After 30 folds, 0.000000047 cm wide. And suppose we could fold it 33 times (which we can never accomplish), the width would be less than an atom.

4 thoughts on “Rapidity of Exponential Growth”