Currently, there are 17 countries with women as head of government, head of state, or both, which according to Inter-Parliamentary Union and UN Women has more than doubled since 2005.

The honour of being the modern world’s first female head of government goes to the late Sri Lankan politician Mrs. Sirimavo Bandaranaike. She served as Prime Minister of Ceylon, now Sri Lanka, three times, 1960–65, 1970–77 and 1994–2000.

Mrs. Bandaranaike was educated at St Bridget’s Convent, Colombo, run by Roman Catholic nuns. She was a devout Buddhist. In 1940 she married Solomon West Ridgeway Dias Bandaranaike. They had three children, Chandrika, Sunethra and Anura.

Her husband Mr. S.W.R.D. Bandaranaike, a member of the State council and son of Sir Solomon Dias Bandaranaike, the Maha Mudaliyar (chief native interpreter and advisor to the Governor of Ceylon), was elected as Prime Minister of Ceylon in 1956. His election marked a significant change in Ceylon’s political history. In 1959, a Buddhist monk assassinated him while in office.

After the death of  Mr. S.W.R.D. Bandaranaike, there was much confusion in the Sri Lanka Freedom Party (SLFP), founded by him, and it was on the verge of collapsing. At the request of senior party members, Mrs Bandaranaike took over the presidency of SLFP. Though she was an untried leader, she quickly established herself as a formidable politician in her own right, and was the long-time undisputed leader of the Sri Lanka Freedom Party. She remained leader of the party for the next forty years.

Known to her fellow Sri Lankans as “Mrs. B,” she could skillfully use popular emotion to boost her support, frequently bursting into tears as she pledged to continue her assassinated husband’s vaguely socialist policies. Hence her opponents and critics dubbed her as “the weeping widow”.

In 1960, M. P. de Zoysa (Jnr) stepped down from his seat in the Senate (appointed upper house of Parliament) paving the way for Mrs. Sirimavo Bandaranaike to be appointed as a member of the Senate from the SLFP.

As a bereaved wife and mother of three, Mrs. Sirimavo Bandaranaike led her party to win the July 1960 elections on the pledge to continue her husband’s policies, notably the Sinhala Only Act, and to proceed with repatriation of the estate Tamils to India. On July 21, 1960, she took the oath as prime minister of Sri Lanka, thus becoming the first female prime minister in the modern world.

But within a year of her historic 1960 election victory, she was inundated by a prolonged ‘civil disobedience campaign’ by the minority Tamil population, outraged by her action in replacing English with Sinhala as the official national language and her order to conduct all government business in Sinhala, the language of the majority Sinhalese. The Sri Lankan Tamils considered this a highly discriminatory act and an attempt to deny Tamils access to all official posts and the law. This led to an increase in Tamil militancy which escalated under succeeding administrations. With no other solution in sight, she declared a state of emergency.

Further problems arose when the government took over foreign businesses, particularly petroleum companies. This move irked the United States and Britain, and aid to Sri Lanka was stopped. So, Mrs. Bandaranaike moved towards China and the Soviet Union and championed a policy of nonalignment.

At home, she crushed an attempted military coup also known as the Colonels coup by Christian officers in 1962.

In 1964, Mrs. Bandaranaike entered into a historic coalition with the Marxist Lanka Sama Samaja Party (LSSP).

In December 1964, Mrs. Bandaranaike and her cabinet were defeated by a no-confidence vote when some of her MPs deserted the party over the nationalization of Lakehouse Newspapers. The SLFP coalition was defeated in the 1965 elections, ending her first term as Prime Minister.

In 1970, she became prime minister of Ceylon once again, after an electoral landslide victory by United Front, her left-wing coalition coalition consisting SLFP, LSSP, and the Communists. She developed strong personal ties with China and the then Indian prime minister, Indira Gandhi.

But after just 16 months in power, the government was almost toppled by the  April 1971 JVP Insurrection of left-wing youths led by the Sinhalese Sri Lankan People’s Liberation Front, or Janatha Vimukthi Peramuna, a movement started in the late 1960s by Rohana Wijeweera, the son of a businessman.

There was no warning of the uprising, and Sri Lanka’s small army was caught off guard, since Mrs. Bandaranaike had disbanded the government’s intelligence service, suspecting that it was loyal to the opposition United National Party (UNP).

Although the insurgents were young, poorly armed and inadequately trained, they succeeded in seizing and holding major areas in southern and central provinces of the island before they were defeated by government forces. Thanks to Mrs. Bandaranaike’s skillful foreign policy, the government was saved by military aid from both India and Pakistan.

This unsuccessful rebellion by Sinhalese Marxist youth claimed more than 15,000 lives. Their attempt to seize power created a major crisis for the government and forced a fundamental reassessment of the nation’s security needs.

During those tough political years, Mrs. Bandaranaike turned herself into a formidable leader. “She was the only man in her cabinet”, one of her officials commented during the height of the insurgency.

In 1971, she declared the country a republic, and changed the name of the island nation from Ceylon to Sri Lanka.

She also nationalised some companies in the plantation sector and restricted some imports.

By 1975 her government gradually became very unpopular. Under the Soulbury constitution, election should have been held in 1975, but she used a clause of the 1972 constitution to delay elections until 1977.

But in 1976, despite high international standing, Mrs Bandaranaike’s popularity at home declined with a faltering economy and allegations of corruption; and she lost much of the support given to her by the left parties, thus paving the way to a crushing election defeat in 1977, winning only 8 pathetic seats and she managed to win her own seat.

The 1980s were her dark years. Sri Lankan parliament expelled her in 1980, accusing her of misusing power for the 1975-77 delay in elections, and banned her from holding any office for seven years.  She became a political outcast, rejected by her own people who had once idolized her.

Her civic rights were restored in 1986, and she narrowly lost the election for the new, more powerful post of president in 1988.

Political observers said that Mrs. Bandaranaike and her daughter Chandrika Kumaratunga did not have a good rapport, and that her daughter wanted her mother to leave the office to make way for a younger person.

Mrs Sirimavo Bandaranaike remained in office till a few months before her death, but had little real power. She reluctantly gave up the reins of power on 10 August 2000. Exasperated she said, “I believe it is time for me to quietly withdraw from the humdrum of busy political life, to a more tranquil and quiet environment” 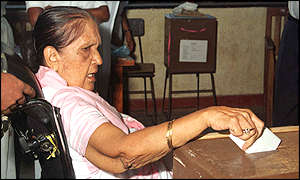 Mrs. Sirimavo Bandaranaike died on Election Day, October 10, 2000, after having cast her vote for the last time. She was 84.